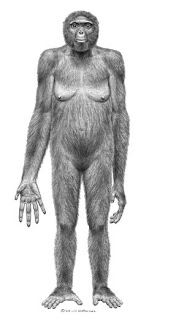 A total of 11 papers are being published in this month's issue of Science on Ardipithecus ramidus and its environment, the first ever published papers on this species.

"We thought Lucy was the find of the century," says paleoanthropologist Andrew Hill of Yale University, referring to the famous 3.2-million-year-old skeleton that revolutionized thinking about human origins. "But in retrospect, it was not."


Indeed it was not. Dubbed Ardi, the Ardipithecus ramidus skeleton was found in 1994 in Aramis, Ethiopia. Until now, we knew Lucy (Australopithecus afarensis) as the oldest known human ancestor skeleton but Ardi, also another female, predates Lucy by about 1.2 million years old. Although not the oldest fossil hominin, Ardi is by far the most complete specimen of all fossil hominin which includes most of the skull and jaw bones, pelvis, hands and feet. These parts are crucial in determining Ardi's (in essence her species's) locomotion, gait, brain size, diet and even the habitat. Ardi and 35 individuals of her species are described by authors of the 11 papers from this month's Science.

Similarities and differences between Ardipithecus ramidus and Australopithecus afarensis:

I know at least one of my professors, Dr. Sara Stinson, would be excited about this publication. Particularly, a female Ardipithecus ramidus with an intact pelvis. The significance of a female A. ramidus pelvis is not only an indication of its gait but also its infant and the child birth process. What was the brain size of an infant A. ramidus? Were they born precoccial or altricial?

Most researchers, who have waited 15 years for the publication of this description and analysis, agree that Ardi is indeed an early hominin. "This is an extraordinarily impressive work of reconstruction and description, well worth waiting for," says paleoanthropologist David Pilbeam of Harvard University. But he takes issue with the idea that the common ancestor of chimps and humans didn't share many traits with the African apes. "I find it hard to believe that the numerous similarities of chimps and gorillas evolved convergently," he says. Regardless, the one thing all scientists can agree on is that the new papers provide a wealth of data for the first time to frame the issues for years. "It would have been very boring if it had looked half-chimp," says paleoanthropologist Alan Walker of Pennsylvania State University, University Park.


Read more about A. ramidus from Science here and those 11 published papers here (if you are not an AAAS member, you can access the papers for free. You just need to fill out a simple registration).

Thanks for the article links!

The ardipithecine foot has a widely abducent hallux which suggest that its mode of bipedalism was similar of Oreopithecus.

Some of the articles argue that the ardithecine remains add support for Sahelanthropus as the earliest African hominin.

It truly is interesting though it's not as "groundbreaking" as many media are reporting since all these findings mostly confirm what we knew or thought we knew. Except the non knuckle-walking part. Hehe ...

Over at John Hawks weblog, he pointed out something interesting. It seems that the publication is coordinated with Discovery Channel's "Discovering Ardi", scheduled to aired on Oct 11th. It smells of Darwinius masillae all over again.

But still, very interesting for the scientific community.