This week I worked with Pyxis and Carme again. Currently they are the only two red ruffed lemurs that I am working with but once Carme has been trained, we will train more female lemurs. I hope that this birth cycle brings more female babies. Would be nice to have a large sample to continue as my PhD project.


Pyxis is starting to learn that the big black box with a red screen is giving her treats but she hasn't quite associate the apparatus with food reward just yet. We have to rapidly reinforce her (giving her a lot of treats) when she is in front of SMARTA so she learns that the black box is giving her food rewards but it is imperative that she stays in front of SMARTA for that to happen. It may take well over a few weeks for her to make that connection, but in due time she will learn to associate SMARTA with food reward and mentally stimulating activities (think video games!).

Carme continues to be trained that she needs to touch the red square to get a food reward. She associates touching a square for food reward but still hasn't make the connection of touching the red square for food reward. She is close though as most of the time, her "incorrect" choices are just her trying to lean on the screen (her initial touch) and then touching the red square. Usually when she lean on the screen, she is touching the side of the screen with the incorrect choice. Because SMARTA is programmed to react to the initial touch, it will register as her "choice" thus resulting in a lot of incorrect choices should we run the test trials with her right now.

We are also training her that she can lean on SMARTA but she'll have to touch the acrylic part (shell) of SMARTA. Most of our sessions now are slowly approximating her from touching the middle of the screen to moving towards the middle of the square so that she knows she has to deliberately touch a square to make a choice and not just wily nilly touching the screen for food reward. We think it'll take another week or so before she is ready for testing.


I will be working with Pyxis and Carme again next week. On Monday, we will have a routine animal welfare observation. I think this is an annual routine, which I had one last year. It's good to know that Duke cares about the welfare of animals used in research.

I worked with Carme on Tuesday and Thursday. She definitely understands that she needs to touch the screen, nay, she needs to touch a square for a reward to dispense. We don't know if she fully understands that she needs to touch the red square though. We will continue to train her so that she understands that needs to touch the red square for a food reward. We are also training her that her initial touch on the screen is her discrimination task "choice". Actually, let me back up a little. Carme usually stations in front of SMARTA and would put one of her hand on SMARTA as support and then the other to make her discrimination task "choice". As you can imagine, this pose a problem when her hand is on the screen; she would immediately get a trial correct or incorrect because her hand is on where the stimulus will appear. We wrapped up with her on Thursday and are quite confident that it'll take a few more sessions with her before she finally understands her task.


I only got to work with Pyxis on Wednesday. This is her first session with SMARTA so what we did was reinforced her when she gets close to SMARTA to investigate or when she looks at the screen. We interspersedly alternate a blank screen and a screen that is fully red to elicit attention from her. We do this to all the lemurs we train because we want them to know that this black box has a screen that will display stimuli. How easy this information is processed by the lemurs is debatable but one thing is for sure, using a well timed positive reinforcement to guide them through a task is imperative. 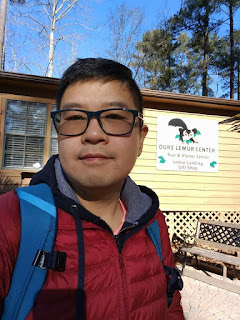 I'm baaaaaaaack!! I took a long vacation from Duke Lemur Center to go back to NYC while my assistant continued my study until December last year. I'm back to continue my study with my last 3 lemurs. Carme, the red ruffed lemur is almost done. She just needs to finish her Phase 2 testing trials, which I think will be done before March.

I have a new research assistant that will be joining me early in March and we will be training Pandora and Pyxis to use SMARTA before running the trials. I am hopefully that these 2 lemurs will cooperate because they have done cognitive research before. Although, if experience had taught me anything, I probably shouldn't expect anything. Ha!

Today is my first day back at DLC but I didn't get to work with any animals. Instead, I spent most of my time fixing and servicing my apparatus. Unfortunately, I found out that one of my electronics for my apparatus broke! I had to order the part ASAP but chances are, I probably won't be able to work with the lemurs tomorrow. It's supposed to snow tomorrow and Monday as well, and from what I heard, usually roads are pretty treacherous this part of the country after it snowed. So, I probably won't be able to work with the lemurs at least until next Tuesday. Bummer! Oh well, at least I am all settled and comfortable at my hotel. More time to spend with my friends and my lil girl Luna.

Special shout out to JetBlue and their Jet Paws program. I brought Luna with me and she had a very pleasant flight out of JFK to RDU. If you are flying with a small dog, I'd suggest flying with JetBlue. 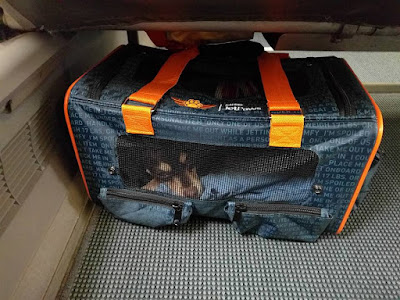 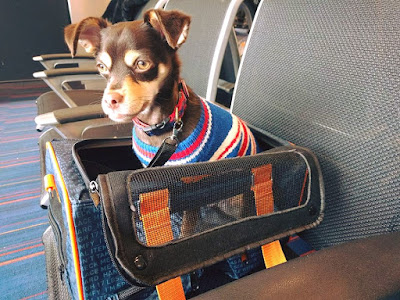 Posted by Raymond Vagell at 4:31 PM No comments: