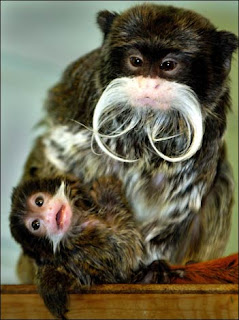 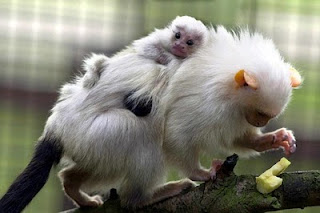 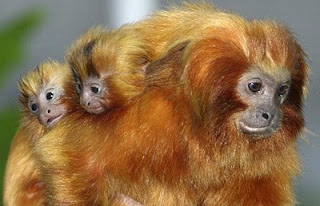 Photo by Julie Larsen Maher (WCS).
The Prospect Park Zoo wants you to help name their Geoffroy’s tamarin twins. Born in April Cannoli and her mate Napoleon, these twins are now about 2 months old and they need a name! Click here to suggest names for the twins. Winning names will be announced on June 21st online. I have personally submitted the name Maya and Milo. What do you think?

You can also watch a video of these babies and their parents on the zoo's website (click here). In the meantime, if you are at the zoo, say hi to the tamarin family in the Animal Lifestyle rotunda (where the Hamadryas baboons are also located!).

Geoffroy's tamarin (Saguinus geoffroyi) belongs to the Callitrichidae (Callitrichid) family. They are New World monkeys, native to Colombia and Panama. Mainly frugivores and insectivores, they do eat exudates (tree gums and tree saps) and green plant parts. Tamarins only feed on exudates when it is readily available, for example, holes left by wood-boring insects and rodents. Unlike marmosets (another Callitrichid), tamarins do not have the adaptation for gnawing on tree barks. 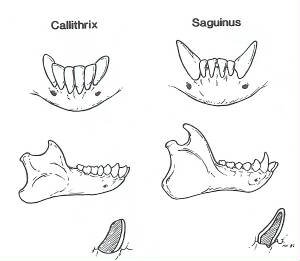 Tamarin's dental morphology are not suited for gnawing on tree barks because their lower canines are longer than their lower incisors. Marmosets, on the other hand, has long forward turning lower incisors that are the same length as their canines.

Geoffroy's tamarin lives in a multimale-multifemale social system and a group generally consists of three to five individuals. Their mating system is usually polyandry (one female, multiple male). Geoffroy's tamarin, like all Callitrichids, almost always give birth to twins.

UPDATE: The twins were given the name "Tira" and "Misu".
Posted by Raymond Vagell at 8:03 AM 2 comments:

Early hominin ate "seafood", possible reason for the expansion of the brain

Recent archaeological find in Koobi Fora, Kenya suggests that our early ancestors might have dined on "seafood" to compensate for the energy and nutrition needed for the expansion of the brain. The excavated site dates 1.95 million years ago, which predates Homo erectus, reveals distinct faunal remains (some with evidence of butchery) and Oldowan artifacts. Detailed in latest PNAS edition, archaeologist David Braun and his team found an assemblage of bones from terrestrial and aquatic animals such as fishes, turtles and even crocodiles along with stone fragments (Oldowan tools) that are thought to be used to cut these animals with. 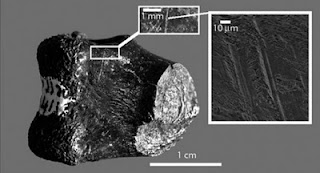 Photograph and scanning electron microscope image of a reptile bone scored by cuts. Image from PNAS.

“These aquatic foods are really important sources of the long-chain polyunsaturated fatty acids and docosahexaenoic acid that are so critical to human brain growth,” said co-author and paleoanthropologist Dr. Richmond. “Finding these foods in the diets of our early ancestors suggests they may have helped to lift constraints on brain size and fuel the evolution of a larger brain.”

Braun posits that if these early hominins indeed ate these terrestrial and aquatic animals (fishes, turtles and crocodiles), then they would have ingested enough calories and fatty acids needed for the expansion of the brain without having to scavenge for animal remains. Braun thinks that these small-bodied hominins would have avoided the dangerous risk of confronting with larger scavengers.

Did Dining on Seafood Help Early Humans Grow These Big Brains? on Discover.

Fossils Suggest Menu That Made Humans Possible on Wired.