This is the thesis that I've been working on for the past year. Finally got it graded and I am really happy about the thesis. After writing this thesis, I have more follow-up questions pertaining to grooming than I had started with so I guess it's a good thing.

Thanks to Dr. Larissa Swedell for supervising my thesis. Also, thanks to Dr. Sara Stinson and Dr. Ekaterina Pechenkina for reading the thesis and your inputs.

Abstract:
Primates groom themselves (autogrooming) and each other (allogrooming) for a variety of purposes. Allogrooming is arguably an altruistic behavior, and may be explained by kin selection. The purpose of this study is to better understand the grooming patterns of captive hamadryas baboons (Papio hamadryas hamadryas) and geladas (Theropithecus gelada) within the context of kin selection theory, which posits that kin will interact, especially in altruistic ways, more than non-kin.

Researchers have discovered a new tamarin subspecies in the Amazon forest of Brazil. A subspecies of the saddleback tamarin, it was named Mura's saddleback tamarin (Saguinus fuscicollis mura) after the Mura Indians, the Amerindian ethnic group that lives in the Purus and Madeira river basins where the tamarins can be found. 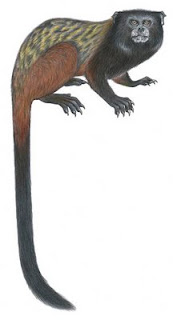 The discovery was published in the June online edition of the International Journal of Primatology: A New Subspecies of Saguinus fuscicollis (Primates, Callitrichidae) by Fabio Röhe, José de Sousa e Silva, Ricardo Sampaio and Anthony B. Rylands.
Posted by Raymond Vagell at 3:27 AM No comments:

No Sex Can do The Muriquis Harm 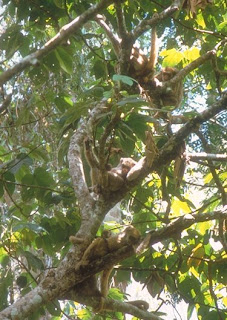 The muriquis, or woolly spider monkeys live in the rain forest of Brazil. They are considered peaceful individuals but an intra-community lethal attack had left researchers to reconsider how peaceful these monkeys are and why such attack occurred.

It is in the southern population that a gang of six male muriquis were observed attacking another male from the same group, brutally biting his face, body and genitals. The male died about an hour later.

A change in dietary habit might be the clue to why such assault happened, said lead researcher Mauricio Talebi of the Federal University of São Paulo-Diadema, Brazil. Social bonding also explains why a gang of males attacked another male. Due to lack of readily available mates, males may become frustrated, creating tension and aggression between individuals. Because muriqui males bond for life with male siblings and relatives, this facilitates gang attacks, said Filippo Aureli of Liverpool John Moores University, UK. This assault can be seen as aggression among non-kin males.

For more, read 'Hippy' monkey is a killer when starved of sex on NewScientist and Intra-community coalitionary lethal attack of an adult male southern muriqui (Brachyteles arachnoides) on Wiley Interscience.
Posted by Raymond Vagell at 5:04 PM No comments: