Chimps Mourn The Death Of Their Own 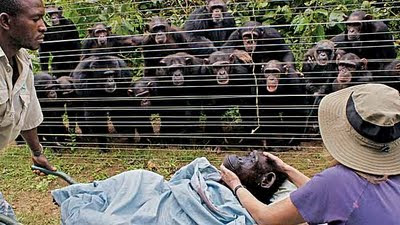 A picture is worth a thousand words. So, I'm gonna just let the photo do most of the talking. Ever since this photo was published it has gone viral everywhere. Read about this news story at National Geographic and an in depth explanation of the photo here.

This photo is not surprising because it is well documented that chimpanzees mourn the death of their own. I guess the reason why it went viral is because the sheer volume of individuals mourning the death of this female chimpanzee. It looks almost human-like and behaviors that are human-like tend to evoke empathy in humans.
Posted by Raymond Vagell at 9:31 PM

This amplifies what I said yesterday bout the dog video with the dog mourning his pal killed by the garbage truck.

Indeed Ray. Although the idea of primates having empathy is rather new, other animals certainly exhibit empathic behavior as well ... just like what you said about the dog video.

Here is the Youtube link to said video. http://www.youtube.com/watch?v=nqH7yJwj__o

I find this an interesting topic always.. I'm not as interested in debating whether animals have emotions or are capable of "grieving" understanding death... No body can say that as fact other then knowing how our own personal experiences with pets touch us.. I am more concerned and saddened by the urgency and desire for people to claim that they don't.

I can say definitively that animals move MY emotions and make ME feel without them saying a word..they can just "be" and THAT in itself is miraculous.. I don't know of any 2 legged creatures that can do that except through music.

Raymond, I hope you won't mind answering a question. This image is very moving, and very powerful, and it has shown up in many blogs as an evidence of existence of grief and sadness in chimps. A friend of mine who has worked with chimpanzees and other primates made a comment that it is common with these primates to gather around to see whenever there is something new going on. Is it possible that these chimpanzees are doing just that, gathering to get a glimpse of an event that is not very common in the group (the dead chimpanzee being solemnly covered and carried away)? Is it also possible that the 'grief' that everyone seems to be seeing in them is borne out of the very human need for anthropomorphic projection?

This may be a very ignorant question, for I know nothing of anthropology or primatology. I would be grateful if you could address this question.

Hi SUIRAUQA. I think the chimps from this photo seems to be grieving due to the fact that most of them were being solemnly quiet as they wheel the dead chimp away. It is this reason that the observer thought the chimps were grieving as chimps tend to be loud rambunctious animals.

While chimps are curious animals, they do have the capability of knowing that a member of their group is dead. It is well documented that chimpanzees "mourn" the dead of their loved ones, sometimes staying close to the dead body for a few days or even mothers clinging on to their dead infant. If I remember correctly, the video "The New Chimpanzees" has a segment where a chimpanzee mother clings on her dead infant for a few days until it starts to decompose.

You are right about anthropomorphic projections though. In any given day, you can go to a zoo and hear people ascribing human-like attributes to animals. An animal that is not active during the day is "lazy" for example. I think humans have an innate desire to anthropomorphically see things around them because it just "makes more sense". Sorta how math problems makes more sense if applied in real-life situations.

However I still think that this photo is a powerful example of chimps having a sense of awareness. Even if the word "grieving" is too human-like, these chimps without a doubt have a sense of what is going on. They know that one of their group member is dead (or being in the state where it remains still and unresponsive).