When It Comes To Being The "Missing Link", Ida -- You Are NOT The Candidate 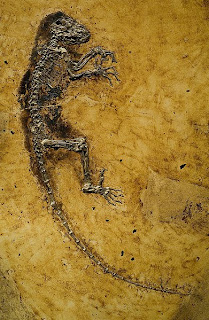 Ida or "Aunt Ida" as many might recall from this summer of craziness sent shock waves around the nation as it was herald the missing link between prosimians and anthropoids (primates and human). Deserving of its own genus, Ida was given the name Darwinius masillae by Franzen et al. (2009) as they describe this specimen in their paper. Darwinius to celebrate the bicentennial celebration of Darwin's claim to fame "Origin of Species" and masillae for the location where Ida was discovered (Messel Pit, Germany).


Complete Primate Skeleton from the Middle Eocene of Messel in Germany: Morphology and Paleobiology was published this summer. Soon thereafter, the general public expressed sheer amazement and curiosity, especially the press who were all too excited to report such breaking news. Hence, "Aunt Ida" became synonymous with "Ida" due to the general public's warm family reception. Others, such as the religious nuts were quick to point out that Ida was just another god(s) creation and the notion of a "missing link" is preposterous. Even Google participated in this frenzy, much to the chagrin of religious right-wing, featuring Ida in Google's logo on May 20th, 2009.

American Museum of Natural History soon announced that you can see Darwinius masillae in their Extreme Mammal exhibit (which I later find out that it is just a cast). The Discovery Center at Times Square also got into the game by exhibiting Darwinius masillae. All these publicity and attention makes one wonder. Is this just a publicity stunt on a premature discovery and discussion? Not to mention all the money they made from this discovery "that changes everything".

I, for one, was on the fence. While I was amazed and interested with the discovery, all these publicity stunt just does not bode well with me. I chose not to write about Ida's discovery in this blog, not because I was too lazy to add my one cent but rather I'd prefer to sit back and listen to all the discussions. One, I'm not a paleontologist nor am I an expert on skeletal morphology. I'd love to know if  Darwinius masillae actually groomed each other though. 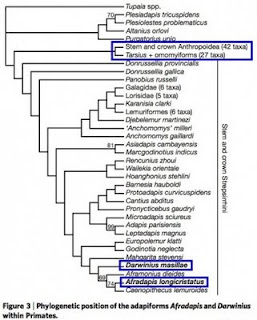 Phylogenetic position of the adapiforms Afradapis and Darwinius within primates. Photo from Wired.

So now that you have both sides of the story, what's your opinion on  Darwinius masillae? I'm betting my bananas that Darwinius masillae is just another product of a highly publicized discovery. Not to undermine the important discovery of this new genus but quoting my undergraduate professor, Dr. Sara Stinson, "There is no such thing as a missing link. We know where everything goes". She's right ... in fact the idea of a "missing link" is just an agent used by those who do not believe in evolution. You know, like the idea of Crocoduck (Hint: Kirk Cameron).