The Uncanny Valley: Humans and Macaques 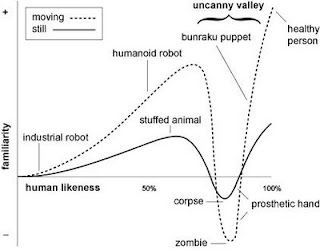 It is the reason why we prefer cartoon characters than CGI characters that look realistic. For example, you are more likely to like the Homer Simpson on the left than the one on the right.

The authors did not conclude why the visual cues of these macaques fall into the uncanny valley, though they did suggest that it has an evolutionary basis.

Remember the picture above? If not, read my blog entry on Contagious Yawning in Chimpanzees. I see you yawn. I wonder if those chimpanzees will yawn if given more realistic synthetic faces.