Modern Humans Are Still Evolving But Will Modern Men Get Wimpier? 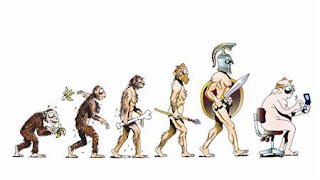 
Modern man a wimp says anthropologist  from Reuters, summarizes Peter McAllister's book Manthropology: The Science of the Inadequate Modern Male. Using various data from Neanderthals and ancient aboriginal populations, McAllister concludes that modern men are inferior than their predecessor in running, jumping, and even sheer brute. "Any Neanderthal woman could have beaten former bodybuilder and current California governor Arnold Schwarzenegger in an arm wrestle", McAllister said. John Hawks from John Hawks Weblog has a lot to say about this in his post Is modern man a "wimp"? I think Hawks is spot on with his post.

The Time article, Darwin Lives! Modern Humans Are Still Evolving, is about a study in a contemporary Massachusetts population led by Stephen Stearns and his team of scientists from Yale University. Using correlations between women's physical characteristics such as height, weight, blood pressure, and cholesterol levels with the numbers of offspring produced, they found that "stout, slightly plump, but not obese" women tend to have more offspring as oppose to women with very low body fat count, as well as women with lower blood pressure and lower cholesterol levels.

Stearns explains that women with very low body fat count, low blood pressure and low cholesterol levels do not ovulate. Ovulation is, of course, when the matured ovarian follicle ruptures and discharge an ovum (or the egg). While human females ovulate about once a month, female chickens ovulate once a day. Of course, we refer to chicken ovum as chicken eggs.

Stearns and his team thinks that the characteristics for producing maximum offspring (stout, slightly plump, higher blood pressure and cholesterol levels) were passed down from mothers to daughters. Separating social and cultural factors using statistical analysis, Stearns and his team were able to conclude that these characteristics were passed down genetically. "Variations in reproductive success still exist among humans, and therefore some traits related to fertility continue to be shaped by natural selection" Stearns says. So women who have more children are more likely to pass down these traits to their offspring.

It explains the notion that modern humans are still evolving because variation in reproductive success means that there are selective pressure that favor certain traits. Interesting to note that while fertility is being shaped by natural selection (as per Stearn and his team's study), artificial selection is also shaping the width of female pelvis and the average brain size of infants being born. Mothers with a narrow birth canal (smaller pelvis size) puts both her and her infant in jeopardy during childbirth. The infant will be stuck in the birth canal due to restricted space. An infant with a larger than average brain size will also get stuck in the birth canal. Both scenarios will likely kill the infant and mother. However the advent of Caesarean section negates the restriction of a narrow birth canal and allows infant with larger brain size to be born.

So, we can see that modern humans are evolving through variation in reproductive success, female pelvis size and average infant brain size is also evolving through artificial selection though it is too early to say which direction the selection is favoring.
Posted by Raymond Vagell at 1:37 AM