Earlier this week, I was lucky to catch this tweet from Stephen, executive director of Primarily Primate:

@MonkeysAndBirds (cont) Of the 25 macaques, about 10 of them have no names (only lab numbers tattooed across their chest, so we need good monkey names.

I tweeted Stephen and submitted a name. I was lucky that the name was actually picked! Meet #29209. Actually meet Kera. Kera is about 4 years old and judging from the pictures Stephen sent me, it looks like he really likes grapes! 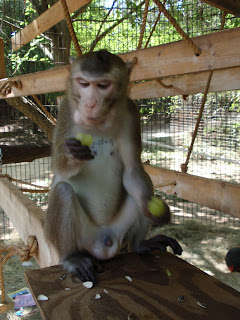 I chose "Kera" because the word kera means monkey in Malay. Me and long-tailed macaques go a long way. Most don't know that it's these macaques that inspired me to be a primatologist when I was just a wee kid. Watching them groom each other peaked my interest in primates. 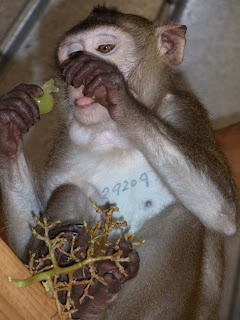 If you are interested in sponsoring one of these macaques (and I hope you do!), you can do so at Primarily Primate's website. Stephen told me that you can also email him with any questions at stephentello AT gmail.com.


For more about the macaques and the journey to the sanctuaries, read the article A Journey of 1,700 Miles, From Toxic Tests to Sanctuary.
Posted by Raymond Vagell at 12:34 AM No comments:

Four Stone Hearth #97 is currently being hosted over at Zenobia: Empress of the East. Head over to the blog and check out some of the best Anthropological blog posts and hopefully you'll bookmark/RSS feed these blogs!

The Fourth Stone Hearth is a blog carnival that specializes in anthropology in the widest (American) sense of that word. Here, anthropology is the study of humankind, throughout all times and places, focussing primarily on four lines of research:


Each one of these subfields is a stone in our hearth.

Four Stone Hearth is published bi-weekly, Wednesdays in odd-number weeks. If you would like to host the carnival, please write to Martin Rundkvist.

If you would like to submit content to the next issue of the carnival, please write to the keeper of the blog in question or to Martin. You are encouraged to submit other bloggers' work as well as your own.
Posted by Raymond Vagell at 6:45 PM No comments: 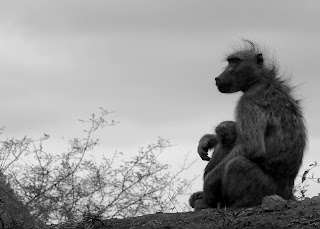 View Larger Map
Eritrea, in relations to other African countries.
Luigi Fossati was an Italian army officer that spent a few year in Eritrea in the 1920's (Eritrea was an Italian colony until the Second World War). Before he went to Eritrea, he already had a strong interest in animals, ranging from the interactions between different animal species and behaviors of lesser known mammal species of that time. Upon returning to Italy in late 1920's, he published several books and papers on hunting and on the behaviors of various Eritrean mammals and birds. The first six chapter of Fossati's (1930) book, Uod Baracà (figli selvage) ed altre storie id bestie selvagge dell'Eritrea, is about his observations on hamadryas baboons in Eritrea. In this presumably early primatological field work, Fossati's observation was done on Mt. Gaab in the Aidereso Valley, near Asmara. Although I can't get my hands on Fossati's book nor am I able to read Italian, Gippoliti and Majolo's paper (2006) comes in handy. They compared some of Fossati's observations to what we currently know about hamadryas baboons and hoped that Fossati's work will be recognized by the scientific community and be considered one of the first field primatologists.
Here are what Fossati observed and published:


Fossati was clearly able to identify and document the behaviors of hamadryas baboons in Eritrea while he was stationed there in 1920's. Gippoliti and Majolo brought up convincing reasons why Fossati's work should be recognized as one of the early primatologists. I think we should re-evaluate how we do research by not only cite "famous" works but to cite any relevant publications out there. I do agree with Gippoliti and Majolo on the importance of early observations that are conducted when human impact on habitat characteristics was minor or irrelevant.

NOTE: A copy of Luigi Fossati: a forgotten early primatologist and his observations on Hamadryas Baboons (Papio Hamadryas) in Eritrea (Gippoliti & Majolo; 2006) can be obtained by clicking on this link and requesting it from the University's website. The paper FREE to view but due to restrictions imposed by the publisher, I cannot attach the paper in this blog.

Reference:
Gippoliti, S. Majolo, B. 2006. Luigi Fossati: a forgotten early primatologist and his observations on Hamadryas Baboons (Papio Hamadryas) in Eritrea. Ethology, Ecology and Evolution 18 (1): 69-72.
Posted by Raymond Vagell at 6:54 PM No comments: 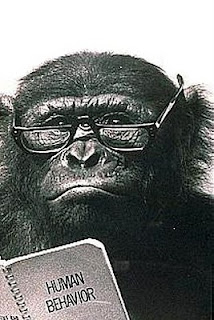 Although Primatology is mainly defined as the scientific study of primates, the definition itself is admittedly broad. Without a doubt, ardent readers of The Prancing Papio know what Primatology is but would you rather define Primatology in a much more descriptive manner? I am for the broad definition of Primatology although it is somewhat vague. I mean, what's easier than to tell people you study primates right? Of course there are times when you actually have to explain what primates are.

I found this interesting article by Erwin (1981), Breadth and Balance in Primatology, that tallies the top twenty areas in Primatology based on numbers of publications reference during 1980. It is interesting to see that "Nervous System" made it to the top of the list (13.4% out of 3809 papers were on nervous system). Less than 10% out of 3809 papers published were on behavior. I'm quite interested to see what the top twenty areas in Primatology in 1990, 2000 and 2009 are. Maybe I'll have to do this research myself. Hmmm ...

Anyway, I found what Erwin addresses in his paper rings true with The Prancing Papio. For awhile now, I've been trying to find a balance in this blog by blogging about a wide topic in Primatology while trying to avoid covering heavily on a certain area of study. However, "materials" seem to come in waves and there are times when I literally have nothing to write about. Sometimes I am left hitting the proverbial wall.

Email ThisBlogThis!Share to TwitterShare to FacebookShare to Pinterest
Labels: primatology

After reading an article from Psychology Today by Hal Herzog, it got me thinking about the idea of pet-keeping. The article "Are Humans The Only Animals That Keep Pets?", claims that humans are the only animal that keeps members of other species for an extended point of time purely for enjoyment. Herzog points out that while some animals are documented having pets, this behavior almost always happen in captive or semi-captive environment where food and shelter are provided. The author believes that humans are "true" pet owners because the owner-pet relationship occurs in a natural setting and argues that animal pet owners are not "true" pet owners because they do so in captive or semi-captive settings. Thus, Herzog believes that humans are the only animals that keep pets.

Cited in the article is a paper by Izar et al. (2006), on cross-genus adoption of a marmoset by wild capuchin monkeys (link to the paper is below on References). While the paper specifically refers to the behavior as an adoption, Herzog and paper co-author Dorothy Fragaszy think that there is a parallel between the capuchin-marmoset adoption and pet-keeping in humans. However, these capuchins live in a site where food are provided daily. So, Despite the similarities, these capuchins are not "true" pet owners according to Herzog's definition of pet-keeping, 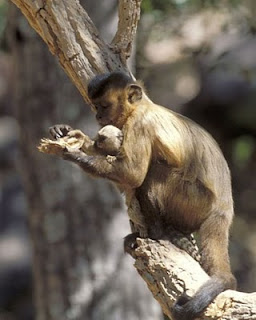 A young marmoset taking food (cracked palm nut) from its adoptive mother’s (capuchin) hand. Photo by Jeanne Shirley (Izar et al., 2006).
What is a pet and how would you define one? Herzog (2010) defines a pet as a member of other species that are being kept for an extended period of time for enjoyment. According to the Merriam-Webster dictionary, the definition of a pet is "a domesticated animal kept for pleasure rather than utility". The definition of a pet in Oxford English Dictionary is "a domestic or tamed animal or bird kept for companionship or pleasure and treated with care and affection". Dr. James Serpell defines pet-keeping as a leisure activity but not necessarily without function, much like there are function in play or other recreational pursuits (Serpell, 1990). He thinks that pet-keeping is functional in a broad sense but not easily evaluable in economic terms.

Some primate pet owners include (left) Koko and (right) Tonda, who both had cats as pets.
While it is impossible to define what a pet is from an animal standpoint, at least in humans, we can agree that a pet can be defined as a companion animal that we treat with affection whose function is to provide us with enjoyment.
Did the behavior of animal domestication evolved into pet-keeping? Is pet-keeping a reflection of human's nurturing instinct? Or is pet-keeping a reflection of human's constant need of social interaction, even outside of our own species? What do you think? Well ... that's for another blog post.
References:

Herzog, H. 2010. Are Humans The Only Animals That Keep Pets? Retrieved July 1, 2010 http://www.psychologytoday.com/blog/animals-and-us/201006/are-humans-the-only-animals-keep-pets