Cannibalism in Gray Mouse Lemur: A Case of Hannibal Lemur 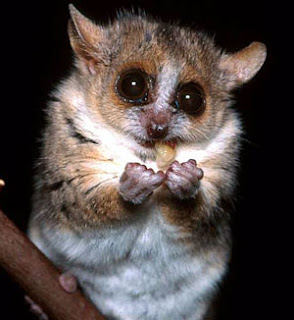 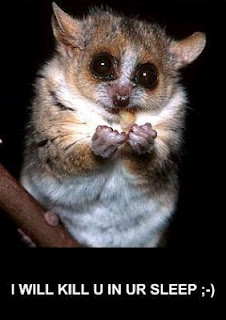 The world of primatology is once again rocked to its core with the discovery of yet another primate species that cannibalize it's own kind. OK, well maybe it's not that serious but that's just a hook for you to continue reading my post.

Reports and observations of meat-eating in primate species have surfaced in recent years through published literature. Most of these primate species have never been observed predating on mammals (they usually eat invertebrates). While many know that chimpanzees occasionally eat meat, each chimpanzee subspecies have different hunting strategies and hunt specific prey species. Chimpanzees (Pan troglodytes schweinfurthii) from Gombe Stream National Park were observed hunting and eating red colobus monkeys (Colobus badius tephrosceles) by Dr. Goodall while western chimpanzees (Pan troglodytes verus) in Fongoli have been observed hunting and eating lesser bushbabies (Galago senegalensis) by Dr. Pruetz. Gomes and Boesch have reported that male western chimpanzees (P. t. verus) would also use meat to barter for long-term mating with females. Reports of meat-eating in Sumatran orangutans (Pongo abelii) had only surfaced as early as this year by Hardus et al. (2012).


Of course, meat-eating is fundamentally different than cannibalism. Cannibalistic individuals eat the flesh of conspecifics. "Meat-eating" in literature generally refers to a meat consumption between heterospecific. In non-human primates, one of the explanations of cannibalism is thought to be a coping response with food scarcity. If food resources are scarce, both mother and offspring will die due to starvation. As a survival strategy, the mother would cannibalize her offspring (which will die soon anyway) as a way of returning the caloric investment back to the female. Juvenile and infant non-human primates are usually observed cannibalized by their mothers. I have covered maternal infanticide in Sumatran orangutans (Pongo abelii) and moustached tamarins (Saguinus mystax) in this blog, although many more primate species have been seen cannibalizing their own offspring. 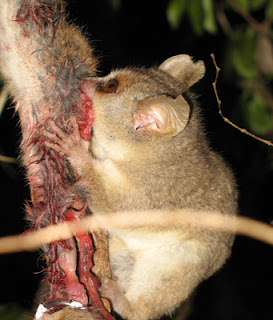 This little gray mouse lemur is going to town with the carcass of an adult female conspecific.
Photo by Anni Hämäläinen (2012)

A recently published paper by Hämäläinen (2012) described a male gray mouse lemur (Microcebus murinus) cannibalizing an adult female conspecific. The author does not know how the female died, but posit that the female could have been killed by predators. However, since carcass of the female was not consumed, it is uncharacteristic for a predator to abandon its prey. The author also suggests that the male seen cannibalizing the female could not have been the predator since female gray mouse lemurs are more dominant than males.

On attempting the second focal session for this individual at 21:52 hr, I encountered her at the approximate same location as an hour earlier, but at this time I could see the reflection of the collar and approached to 10 m distance. I found that she was dead and her body was being fed on by a conspecific male.

The carcass was hanging head down from a branch at 1.5 m elevation from the ground. At the time of discovery, the body cavity had been torn open and the internal organs eaten. The skull had also been broken and the brain consumed. Additionally, the flesh had been torn from one hind and one fore limb. The corpse was known to be fresh since the individual had been seen active earlier and when the body was recovered, rigor mortis had not yet set in. When sighted, the cannibalistic male was ferociously biting into the protruding spinal cord (Fig. 1, supplementary material) and continued feeding on the body (the spine, ribcage, and soft tissue) for approximately 20 min after sighting.

After his departure, I collected the body and brought it into the field camp, where a veterinarian conducted an autopsy the following morning. The autopsy provided no further clues to the cause of death or the animal’s health status since all the vital organs were missing.


The author claims that this is the first ever reported cannibalism in gray mouse lemur and the first incident of adult conspecific cannibalism in non-human primates in literature. The significance of this discovery is not just that a gray mouse lemur is seen cannibalizing its own kind but in some way reflects the flexibility of their diet. This observation could also further elucidate the foraging strategies of this species. Gray mouse lemurs could have been scavengers but because they are a cryptic species, this behavior was never observed by scientists. The author posit that cannibalism might be an immediate way of accessing nutritional and energetic benefits, therefore is adaptive in the individual level.

For more about this paper, please see A Case of Adult Cannibalism in the Gray Mouse Lemur, Microcebus murinus by Anni Hämäläinen (2012) published on American Journal of Primatology (AJP). You can also read about it on Science, ScienceShot: Cannibalism Seen in Gray Mouse Lemur.