I bet there are some of us out there that wonders how our hominin ancestors started to walk bipedally. They didn't just stood up and walked upright, that's for sure. One good explanation is that they first evolved a bipedal gait, not bipedal locomotion. Many scenarios had been set forth to imagine how the evolution of bipedalism had occurred.

Roger Westcott in 1967 proposed the "Upright Display Scenario" as one of the causes of bipedality, other causes include carrying tools and looking over tall grass while scavenging or predator avoidance. He suggests that bipedal behavior was adaptive because it made the bipedalist appear taller to intimidate their protagonists (other males) and predators. He also suggests that these displays were frequent and impressive. Westcott draws his scenario from threat display behaviors exhibit by the African apes; gorillas and chimpanzees.

Westcott proposed that early hominins had agonistic interactions which includes "two-legged standing or running, probably accompanied by fist-shaking or arm-waving, and possibly involving the seizing and brandishing of sticks or stones" (Parker and Jaffe, 2008). 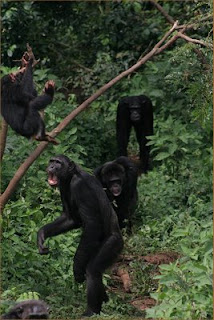 To see a video of a living model of how this could have occurred, see my blog post:

or read a few of my papers on this subject:

Cranio-dental evidence of a hominin-like hyper- masticatory apparatus in Oreopithecus bambolii. Was the swamp ape a human ancestor? (2008) Bioscience Hypotheses

I'm not too familiar with Oreopithecus but there is always a possibility that bipedality is an adaptation to semiaquatic habitat.

One thing I am unsure of is where Oreopithecus would fit in the hominin evolutionary tree. Are they before or after Dryopithecus?

Oreopithecus is dated between 7.5 and 7.6 million years ago. It was isolated on the island of Tuscany-Sardinia for nearly 2 million years and is probably descended from the African hominoid, Mabokopithecus. In my paper,I did an extensive comparison of the Oreopithecus cranio-dental morphology with other hominoid primates including Sahelanthropus which Oreopithecus was extremely similar to.

Anyone who wants a pdf copy of my Bioscience Hypotheses Oreopithecus paper can email me at: newpapyrus@yahoo.com

Thanks, Marcel.
Roger Wescott, after learning about Hardy's theory, became a great promotor of the waterside theory of human evolution, eg, his article "The pardoxical primate: a review of the aquatic ape." For several years we had an intense correspondence on AAT, language origins, etc., and Roger published our paper "Bipeds, tools and speech" in Mother Tongue, 1999. Unfortunately, Roger died a few years ago.
For my view on the origins of bipedalism, please google "aquarboreal" (which BTW is a word coined by Marcel Williams).

Sorry for this belated answer, Raymond. This thread was about Roger Wescott's Upright Display Scenario. Roger, like me interested in human evolution & speech origins, was co-editor of Mother Tongue, a journal on language origins. After he had heard of the littoral theory of human evolution (eg, google "econiche Homo"), he believed that human bipedality had to do with our waterside past, and that breathing control for diving for seafood was a preadaptation to the evolution of human speech.

Ah, thanks for the clarification!