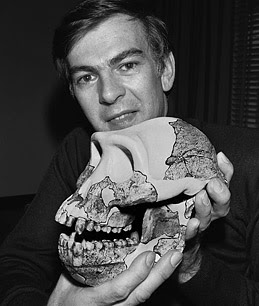 Time magazine had a Q&A with paleoanthropologist, Dr. Donald C. Johanson on his new book, Lucy's legacy: The Quest for Human Origins, a continuation of his previous book, Lucy: The Beginning of Humankind and his discovery of "Lucy" the female Australopithecus afarensis.

To set the record straight, it was the Beatles' song "Lucy in the Sky with Diamonds" that gave birth to the hominid's name, correct?

Yes, the whole camp was listening to Beatles' tape because I was a great Beatles fan, and "Lucy in the Sky with Diamonds" was playing and this girl said, well if you think the fossil was a female, why don't you name her Lucy? Initially I was opposed to giving her a cute little name, but that name stuck.

Read about the Q&A here.

Here's a trivia for you: Do you know that Australopithecus afarensis means the Southern ape of Afar, named after the area where Lucy was found (Afar, Ethiopia).
Posted by Raymond Vagell at 12:00 PM

If evolution isn't real, then how do you explain that skull Mr. Johanson is holding? I'll hold while you ask your God.

^^^
Wheres your proof of god?
How do you know the "bible" wasn't a story written by some kid who lost it and some guy picked it up, so now we must all hail a book...?
REALLY? Hahahahahahha you make me laught