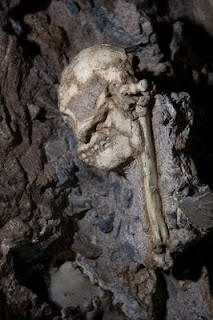 Little Foot's skull and upper left arm. Photo from The Witness.
10 years later, Little Foot will finally be given a species name. Read about the discovery Little Foot in 1998 from Washington Post here.

Professor Ron Clarke of the Institute for Human Evolution and School of Anatomical Sciences at the University of the Witwatersrand will start identifying Little Foot for the latest issue of the South African Journal of Science. According to Clarke, Little Foot does not belong to the species Australopithecus afarensis or Australopithecus africanus, but to a unique Australopithecus species previously found at Makapansgat and Sterkfontein Member Four. Read the article from The Witness here.
Posted by Raymond Vagell at 7:01 PM