Hamadryas Baboons: Who's Who At The Prospect Park Zoo


The hamadryas baboon troop at the Prospect Park Zoo are divided into two groups. Group #1 consists of 6 members: a one-male unit (OMU) with a female and 4 offspring. Group #2 consists of 4 members: a OMU with three females. Group #1 is dominant over Group #2. It took me a few visits to tell them apart, observing unique features in their face or body helps a lot. Also, these are not their real names given by the zoo. I find it easier to remember them if I name them myself. The baboon's "zoo name" is given in the bracket ( ). 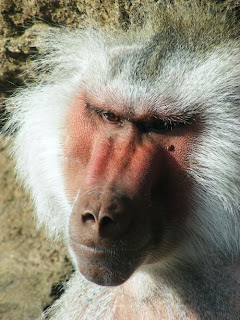 Ben (Simen) is the leader male of Group #1 and also alpha male of the Prospect Park Zoo population. You can tell Ben apart from the other males because he has a mole underneath his left eye. 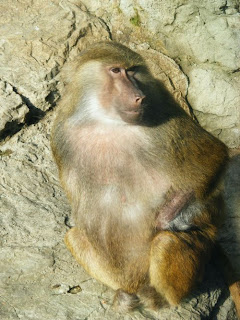 Mimi (Matara) is Ben's female. She is the mother of Fifi, Fadi, Neji and Ken. She is always near Ben and you can distinguish her from the rest of the females because she has a bigger belly and yellower fur. She is actually a hamadryas and olive baboon hybrid! 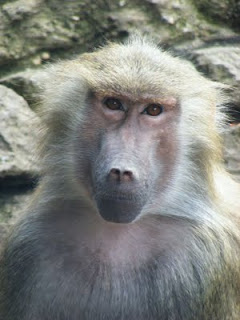 Fifi (Binti) is Ben and Mimi's daughter. She has a scar on the middle of her back and she is always seen with Ken and Neji. 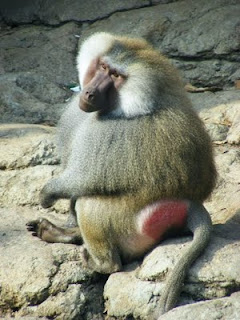 Fadi (Moja) is Ben and Mimi's eldest son. He likes to be alone most of the time and can be seen near Neji a lot to groom him or be groomed by him. Fadi is a little bit tubbier than the rest of the males. 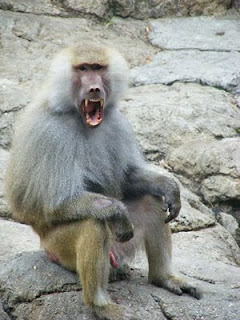 Neji (Nyali) is Ben and Mimi's middle son. He is a troublemaker. He has a scar on his lower left cheek. Neji likes to play with Ken and Fadi. Sometimes you can see Neji trying to herd Pam away from Leo. 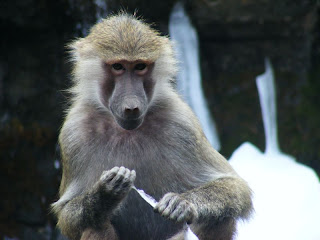 Ken (Kito) is Ben and Mimi's youngest son. He is very energetic, much like any other child. Ken likes to hang around with Neji and Fifi. 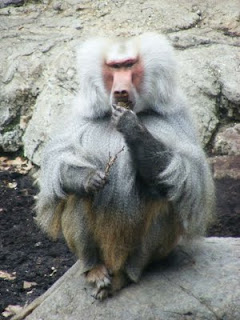 Leo (Bole) is the leader male of Group #2. He is lower ranking than Ben. Leo has a fuller and longer mane than Ben and Fadi. He is always seen with or close to Jenn, his favorite female. 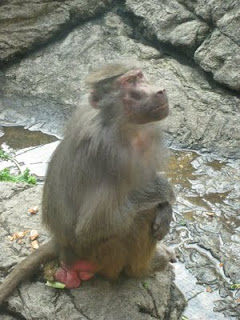 Jenn (Zula) is Leo's female. She is higher ranking than Anne and Pam, and she is Leo's favorite. She can be seen with or near Leo most of the time. Due to obsessive grooming by Leo and her old age, she looks rather mangy. This picture was taken when she was on her estrus cycle (sexual swelling). 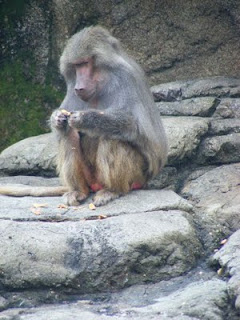 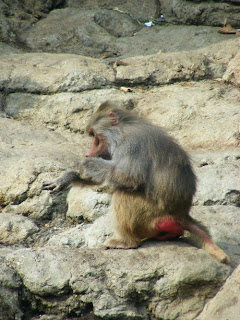 Pam (Kobo) is Leo's female. She is the lowest ranking of all females. She was easily recognizable by her short tail. She is herded away from Leo by Neji at times but she doesn't seem to mind as she enjoys grooming and getting groomed by Neji.
Posted by Raymond Vagell at 12:05 AM

I WATCHED A DOCUMENTARY ON A WOMAN THAT SAVES BABOONS, IT WAS INTERESTING. I CAME TO APPRECIATE THE BABOON JUST AS I DO THE GREAT APES.
ALL OF THESE CREATURES ARE IMPORTANT TO OUR WORLD, AS WE KNOW IT.

That is a very nice photo! Thanks for sharing.