The Semantics of Vervet Monkey Alarm Calls: Part I 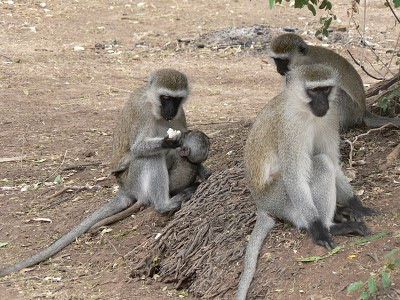 Vervet monkeys. Photo from Wikipedia.
Here, I will focus on the study of predatory alarm calls in vervet monkey (Chlorocebus pygerythrus) by Seyfarth et al. (1980) in the Amboseli National Park, Kenya. Vervet monkeys are Old World monkeys that range between Eastern and Southern Africa. These monkeys are diurnal and live in closely-knit social groups. They are quadrupedal and are both terrestrial and arboreal. Like all Old World monkeys, vervet monkeys have the characteristic cheek pouches that enables them to forage and store food to be eaten later. Male vervet monkeys have blue scrotal area and a red penis. Males and females are sexually dimorphic, with males slightly larger than females. 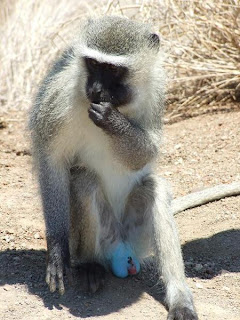 As we said before, different alarm calls evoke different responses. Leopard alarm calls would make the monkeys run up into the tree to avoid being ambushed by the leopard. Also, these monkeys would sit on the branches further away from the tree because, even though leopards can climb trees, the branches could not support the leopard's weight. When an eagle alarm call is given, vervet monkeys would make them look up, run for the nearest bush or both to avoid an approaching aerial attack. Python alarm calls would the monkeys stand bipedally and look down on the ground. 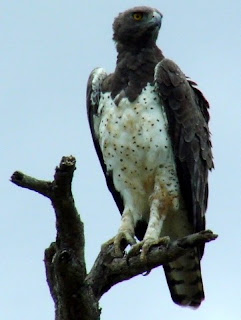 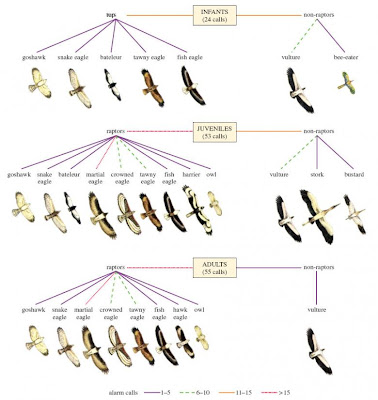 Alarm calls made by infant, juvenile and adult vervet monkeys in response to sightings of birds of prey (raptors) and non-raptors. The number of calls cited for each age group refers to the total number of calls that were analysed (Gould & Gould, 1999). Click on illustration for larger view of the image.
The study of vervet monkey alarm calls by Seyfarth et al. (1980) laid an important ground work to better understand the complexity of animal communications. By showing that vervet monkeys make different alarm calls to different predatory species, we can posit that vervet monkeys have the ability to categorize different species. The ability to discriminate between terrestrial mammal, flying birds and snake-like objects starts during infancy in vervet monkeys. As they get older, they are better at associating predators with specific alarm calls. 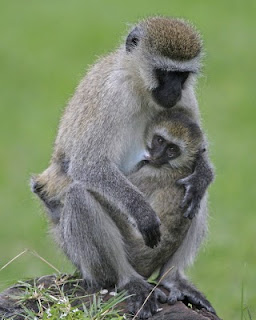 An infant vervet monkey with its mother. Photo by Lip Kee from Flickr.
The ability to over generalize during infancy is evident in both vervet monkeys and humans. For example, upon learning the word "dog", human infants would refer to quadruped mammals they see as "dog". As the infant grows, so does the ability to associate the semantic meaning of words they learned. However, the acquisition of alarm calls in vervet monkeys is different than the acquisition of speech (language) in humans. Alarm calls in vervet monkeys are instinctual and not learned. Humans, however, have to learn their language. Failing to do so during the "critical period" generally will result in the inability to learn language in later years. Feral child are examples of human infants that lack linguistic input during their critical period of language acquisition.

Most of us interpret animal alarm calls as an uncontrollable auditory response to fear or pain, akin to humans yelping if we had our finger caught in a door. While this is not entirely false, some animal calls actually convey information from the caller to the listener. Seyfarth et al. (1980) posit that vervet monkey alarm calls are actually basic semantic signals or symbolic signals because each alarm calls seem to mean something to these vervet monkeys. While we don't know if these alarm calls actually mean "leopard" or "run up to the tree", we do know that it conveys specific information to their conspecific about approaching predators.

I will be blogging Part II of this post later this week, where I will explain in details the experiments done by Seyfarth and Cheney on vervet monkey alarm calls.

Thank you for the intersting article!

Beautiful blog. Thank you for this wonderful sharing. Keep sharing.

This is an informative post which is so clear and understandable. It is excellent information with unique content of this blog and it is very useful to know about the information based on blogs.
Website Development Company in Delhi

I am virtually impressed about the data you provide for your article. I have to say am enormously crushed by your whole story. It’s not easy to get such exceptional statistics these days. I sit up for staying right here for a long term.

I really enjoyed reading this blog. It was explained and structured with perfection; Best Digital Marketing Company in Delhi

The best website designing company in Delhi is Online Front, which provide services like creative designs and Web designing etc. By using the different skills. We will provide you the best design for your online store. Do you know why we design interactive and responsive websites for you? Because , website is your first impression on your prospective customer. That’s why the best website design is important for making your online store as a brand.
Visit:-

Definitely imagine that which you stated. Your favourite reason appeared to be at the net the simplest factor to take note of. I say to you, I definitely get annoyed at the same time as other people consider issues that they plainly do not recognize about. You managed to hit the nail upon the highest and defined out the whole thing with no need side-effects , folks can take a signal. Will likely be back to get more. Thank you

Thanks for sharing a useful knowledge-sharing blog.

It helps in understanding and increase in knowledge.

Awesome and entertaining article. I like to write a little comment to support you. I just stumbled upon your blog and wanted to say that I have really enjoyed reading your blog posts.
카지노

Of course, your article is good enough, 슬롯사이트 but I thought it would be much better to see professional photos and videos together. There are articles and photos on these topics on my homepage, so please visit and share your opinions.

I finally found what I was looking for! I'm so happy. 사설토토사이트 Your article is what I've been looking for for a long time. I'm happy to find you like this. Could you visit my website if you have time? I'm sure you'll find a post of interest that you'll find interesting.