Cheek pouches are bilateral sacs on the lower cheek wall where food moves between the oral cavity and pouches through a slit-like opening (Lambert & Whitham, 2001). Most of us are familiar with cheek pouches in rodents, such as chipmunks, squirrels and hamsters. The cheek pouch is also one of the most important and distinguishing physical characteristics of the cercopithecines. 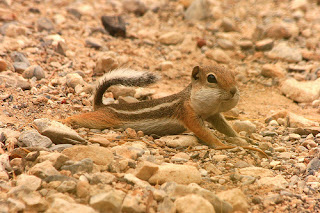 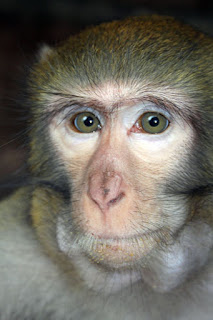 A study of blue monkeys (Cercopithecus mitis stuhlmanni) by Smith et al. (2008) in the Kakamega Forest, Kenya shows that individuals are more likely to use their cheek pouch when their nearest neighbor is higher ranking than them.

Lambert & Whitham (2001) observed a group of captive yellow baboons (Papio cynocephalus) at a zoo and found that cheek pouches are mostly used when there are intense competition with their conspecific during main feeding time. Higher ranking individuals are less likely to use their cheek pouches compared to lower ranking individuals. The authors posit that the cheek pouches is an anatomical solution to maximizing energetic input while mitigating competitive intraspecies and interspecies competition. 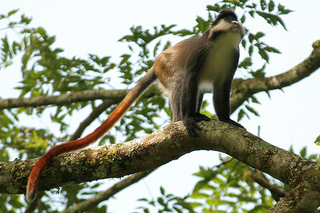 Red-tail monkeys, like the one above, are more likely to use their cheek pouches in the presence of their conspecific and more so when the number increases.
Predator Risk and Avoidance:
Lambert's (2005) study also shows that both red-tail monkeys and grey-cheeked mangabeys retreated to the safety of dense vegetation to process foods that were stored inside their cheek pouches. Lambert posits that this is a predator avoidance strategy.

Smith et al. (2008) posits that blue monkeys were less vulnerable when emptying their cheek pouch than filling them, therefore supporting the hypothesis that cheek pouch is selected for predator avoidance and reducing exposure to aerial predation. These blue monkeys (and most arboreal primates) retrieve to an area with high-density foliage and closer to the trunk of the tree to reduce exposure to predators. 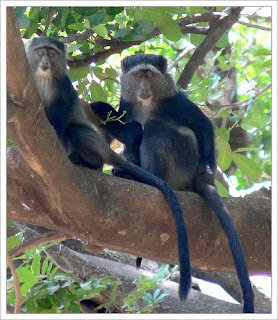 Blue monkeys are less vulnerable when processing food in high-density foliage.
Storing Food, Resource Distribution:
Lambert's (1998) study also showed that red-tail monkeys and grey-cheeked mangabeys were significantly more likely to use their cheek pouches when feeding in clumped and high-quality resources (such as fruits).

Lambert & Whitham (2001) posit that the cheek pouches is an anatomical solution to maximizing energetic input while mitigating competition over limited food resources.

Smith et al. (2008) posit that cheek pouches use could also reflect the differences in the distribution of food resources (such as leaf feeding sites). Cheek pouches can be used to maximize foraging on extremely competitive resources. 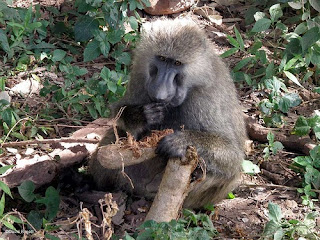 An olive baboon feeding on the fruit of a Sausage Tree (Kigelia) in Manyara, Tanzania. Notice that she is stuffing her cheek pouches with the fruit. Photo on Flickr by Kibuyu.

Overall, cheek pouches in cercopithecines are used for more than one function and most probably varied between different species. Whether it is for interspecies/intraspecies competition, predator risk and avoidance or resource distribution, cheek pouches provide an added advantage for survival and are probably the reason why they were selected.

Lambert, J.E. 1998. A field investigation into the adaptive function of the cercopithecine cheek pouch. American Journal of Physical Anthropology 25(suppl): 145–146.

Lambert, J.E. 2005. Competition, predation, and the evolutionary significance of the cercopithecine cheek pouch: The case of Cercopithecus and Lophocebus. American Journal of Physical Anthropology 126(2): 183-192. DOI: 10.1002/ajpa.10440.

Yay cheek-pouching! I worked on a cheek-pouching project when I was on Cayo--hopefully we will get the ball rolling on working on that manuscript. The abstract is in the AJPA supplement, from 2007 (I´d look for it and send it to you, but I´m at an internet cafe and don´t have my laptop...).

Yay! Please do Michelle. I find it quite hard to find cheek pouch studies of Asian cercopithecine species.