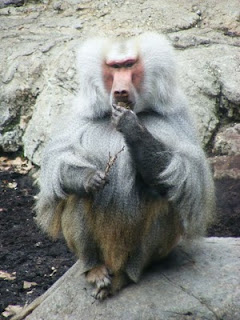 Congratulations to Bole for being the father to two healthy and beautiful babies! Born on July 23rd and July 28th respectively, these two babies are a bundle of joy for mothers Kaia and Rebecca. The last time Prospect Park Zoo had a baboon birth was 6 years ago, a male baboon named Kito to mother Matara and father Simen.


Kaia and Rebecca (both 7 years old) were sent from Bucknell University to breed with Bole, a longtime resident of the hamadryas baboon exhibit at Prospect Park Zoo. For now, the babies are referred to #1 and #2 but that will change come September 24th. Prospect Park Zoo is asking you to submit names for these two fur balls no later than September 21st. Then, on September 24th, the zoo will announce the winning names. To suggest names, please visit Prospect Park Zoo's website here.

Personally, the birth announcement was an exciting news because I've come to "know" Bole after spending almost a year observing him at Prospect Park Zoo. The 18 year-old Bole were especially closed to one of his three females, Zula. Together with Zula, Bole can been seen obsessively grooming each other up to the point where both of them had bare patches of skin. That, my friend, is one extreme PDA!

Without a doubt, the introduction of Kaia and Rebecca into Bole's group will change the troop's dynamics but I am very curious to see what the changes are to Bole's group. What will happen with the relationship between Bole and his three original females (Zula, Mekele and Kobo)? My recent observations suggest that Mekele and Kobo had moved from Bole's group into Simen's group. While I probably won't know the exact reasons why they would do so, I'm guessing that these lower ranking females are joining a much more dominant group for better access to food resources (higher ranking members get access to more preferable pieces of fruit, etc.).

Read more about the baby baboon here.
Posted by Raymond Vagell at 5:44 PM

Aaaaahhh so CUTE!!! Love the way the mothers hold their tails to control them, reminds me of my mother jejeje

Imitation is the most sincerest form of flattery. Hehehe.

They are really cute. I have yet to see them but I do plan on going next Wednesday!