Apes Walking Upright: That's Just How They Roll (or Walk).

Orangutans, gorillas and chimpanzees do it. Bonobos seem to love doing it. Apparently gibbons do it really well. Indeed, bipedalism is not unique to humans and is quite common among apes. Apes are known to walk upright once in awhile, although bonobos seem to do it more frequently than other apes. Bipedalism is just one of the natural repertoire of ape locomotion. 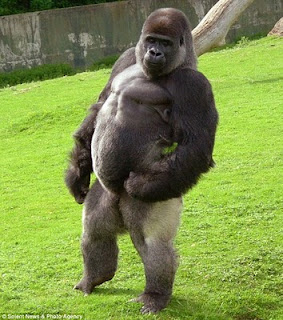 Ambam the gorilla. Photo from Dailymail.

Currently going viral on the internet is a video of Ambam, a Western lowland gorilla (Gorilla gorilla gorilla) that was filmed walking upright in his enclosure. This 21 year-old, 485 lb. ape currently resides at Port Lympne wild animal park in Kent, England.

If you have not heard of Ambam or caught on to this internet sensation, you can read about him on :
Ambam, the swaggering silverback gorilla who walks around his pen on two legs (DailyMail)
Yes, he can walk. But just how close IS he to being human? (DailyMail)
Walk like a man: Gorilla strolls on hind legs (MSNBC).


It is not uncommon to see a gorilla walk upright but what's unique about Ambam is that he seems to walk upright quite frequently and good at it too. Bipedal locomotion is common in gorillas but they spend most of their time knuckle-walking. Ambam's upright gait and locomotion is definitely not an upright display to intimidate. Instead, it is most probably in response to curiosity and foraging in his enclosure. One of his keeper, Phil Ridges said:

"We think he might use it to get a height advantage to look over the wall when keepers come to feed him and standing up can also help him in looking for food generally in his enclosure as it gives him a better vantage point." Ridges added that Ambam could also carry more food if his hands were freed from walking and it also meant "he doesn't get his hands wet when it is raining."


It seems that the penchant for bipedalism runs deep in Ambam's family. His father, sister and half-sister (same father) prefer to walk upright and stand the same way as Ambam. 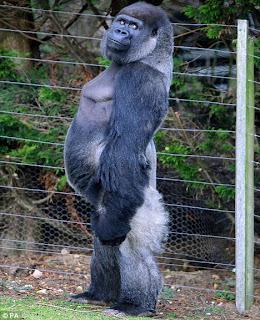 Is this a novel behavior in response to being in captivity? Is his skeletal and muscular structure (and in some sense his father, sister and half-sister) different than other gorillas? I think it would be interesting to see a behavioral study and an ethogram on Ambam's choice of locomotion. What are the percentage (or time spent) of him walking upright compared to knuckle-walking. Will his offspring be a fan of bipedality as well?

The Other Upright Ape:
While Ambam seem to prefer walking upright once in awhile, there is another ape that came before him who is a habitual biped. This ape is a chimpanzee named Oliver. 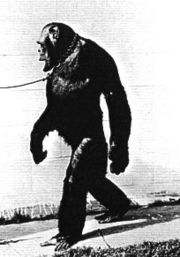 Oliver was a media (and science) sensation in the 60s and 70s for his preferred upright locomotion, having 47 chromosomes and a less prognathic face compared to other chimpanzees. Humans have 46 chromosomes while chimpanzees have 48 chromosomes. It was thought that Oliver is a "missing link" between chimpanzees and humans, thus nicknamed the "humanzee". While Oliver is not the missing link (Ely et al.,1998), he is truly a habitual biped.

The 52 year-old Oliver currently resides at Primarily Primates, a sanctuary in San Antonio, Texas. Below is a really good video of Oliver from his early years to his retirement. Seeing what happened to Oliver, I hope that they will not parade Ambam around like a freak of nature.

Maybe Charles Darwin was right after all :)

Not sure what you are hinting at about Charles Darwin being right. Care to elucidate?

While it's interesting that this guy is walking upright like that, I think we ought to be careful about suggesting that human bipedal locomotion could have evolved from the kind of terrestrial quadrupedalism that the African apes do. Yes, he's able to facultatively walk around like that, but the gorilla body has evolved in a completely different way than the human body, and almost certainly looks nothing like the last common ancestor of either.

All I can think about is the movie "Planet of the Apes" and I'm thinking that evolution finds a way...we, as homosapiens, are in trouble, if we keep on abusing our fellow animals on this planet. I can see us on the flip side of the situation...in cages, freaks of nature displays, unable to live free, human experimenting...it's so not good. Thank goodness for organizations like, Primarily Primates. I just wish we didn't have to use them if you know what I mean.

Although folk science keeps on distributing images and stories about our quadrupedal ancestors running like dogs or squirrels, the paleontological evidence since ever supports a different view. Miocene apes had probably a “generalist” locomotion repertoire, with main (anatomical) adaptations towards suspensory life style. Orangs can be a good model for this. And the suspensory habit is a perfect preliminary condition for bipedalism: bones and organs are already organized in an orthograde (vertical) fashion, like in bipedalism. From suspensory to bipedal locomotion you just have to strengthen legs and weaken arms … Anyway the upright postures in current apes demonstrate that even specialization for other kind of locomotion patterns (quadrupedalism/knuckle walking) leaves the door to bipedalism still open …