The "Out-Of-Africa" Model is something that all Biological Anthropology students get drilled into their heads in Anthropology 102. Some Homo erectus migrated out of Africa to different regions. Archaic Homo sapiens then evolved from Homo erectus. Archaic Homo sapiens from Africa migrated out and displaced other archaic Homo sapiens from different regions. These archaic African Homo sapiens then evolved and became anatomically modern humans (Homo sapiens sapiens) Academically it is also call the recent single-origin hypothesis (RSOH), the Replacement Hypothesis or the Recent African Origin (RAO) model. These hypotheses came from the discovery of mitochondrial DNA, a kind of DNA that's only passed down by females to their offspring. Tracking this mitochondrial DNA, we can all draw our lineage back to a single female aptly named Mitochondrial Eve. Read about the "Out-Of-Africa" Model from a wiki entry. 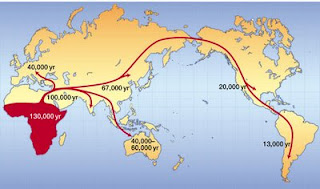 Well all that is fine and dandy. We were even told that the "Multiregional" Model is pretty much not accepted in academia nowadays. However, this dude begs to differ.

The "Multiregional" Model. Illustration from Wikipedia.
Akhil Bakshi, an Indian "explorer" led a multidisciplinary Gondwanaland Expedition across the 17 countries of South Asia, West Asia and Africa. He questions the "Out-Of-Africa" Model and in favor of the notion that anatomically modern humans were the byproduct of interbreeding between archaic Homo sapiens across different regions. He is actually in favor of the "Multiregional" Model.

Read his article here (text or .pdf). What do you think?
Posted by Raymond Vagell at 12:00 AM

I'm also a strong Multiregionalist. Fundamentally, I believe Homo encompasses just one species. And I view Homo habilis and Homo erectus as chronospecies that were selectively moving in the direction of Homo sapiens no matter where they existed. And I believe that gene flow has maintained Homo as-- just one species-- over the past 2.6 million years with no member of Homo being isolated long enough in one particular region for speciation to have occurred.

I also believe the Jolly's paper on Papionin monkeys lends strong support for the Multiregional hypothesis in the human species:

A proper study for mankind: Analogies from the Papionin monkeys and their implications for human evolution.

This paper's theme is that analogies drawn from the cercopithecine tribe Papionini, especially the African subtribe Papionina (baboons, mangabeys, and mandrills), can be a valuable source of insights about the evolution of the human tribe, Hominini, to complement homologies found in extant humans and/or African apes. Analogies, involving a "likeness of relations" of the form "A is to B, as X is to Y," can be usefully derived from nonhomologous (homoplastic) resemblances in morphology, behavior, ecology, or population structure. Pragmatically, the papionins are a fruitful source of analogies for hominins because they are phylogenetically close enough to share many basic attributes by homology, yet far enough that homoplastic modifications of these features are easily recognized as such.

In "The Seedeaters," an analogy between Theropithecus among baboons and Australopithecus africanus among hominines was the source of a widely discussed (and often misrepresented) diet-based scenario of hominin origins that explained previously unassociated hominin apomorphies, interpreted basal hominins as nonhuman rather than prehuman primates, and accommodated a basal hominin adaptive radiation of at least two lines. Current usage recognizes an even more extensive evolutionary radiation among the basal hominins, originating no earlier than about 7 ma, with multiple lineages documented or inferred by 2.5 ma. Although multilineage clades (especially the Paranthropus clade) within this complex are widely recognized, and emerge from sophisticated, parsimony-based analyses, it is suspected that in many cases, developmental or functional homoplasies are overwhelming the phylogenetic signal in the data.

The papionin analogy (specifically the splitting of the traditional, morphology-based genera Cercocebus and Papio mandated by molecular evidence) illustrates the power of these factors to produce erroneous cladograms. Moreover, the rapid deployment of basal hominins across varied African habitats was an ideal scenario for producing morphologically undetectable homoplasy. There seems to be no foolproof way to distinguish, a priori, homologous from homoplastic resemblances in morphology, but one pragmatic strategy is to severely censor the datset, retaining only resemblances or differences (often apparently trivial ones) that cannot be reasonably explained on the basis of functional resemblance or difference, respectively. This strategy may eliminate most morpological data, and leave many fossil taxa incertae sedis, but this is preferable to unwarranted phylogenetic confidence. Another source of phylogenetic uncertainty is the possibility of gene-flow by occasional hybridization between hominins belonging to ecologically and adaptively distinct species or even genera. Although the evidence is unsatisfactorily sparse, it suggests that among catarrhines generally, regardless of major chromosomal rearrangements, intersterility is roughly proportional to time since cladogenetic separation.

On a papionin analogy, especially the crossability of Papio hamadryas with Macaca mulatta and Theropithecus gelada, crossing between extant hominine genera is unlikely to produce viable and fertile offspring, but any hominine species whose ancestries diverged less than 4 ma previously may well have been able to produce hybrid offspring that could, by backcrossing, introduce alien genes with the potential of spreading if advantageous. Selection against maladaptive traits would maintain adaptive complexes against occasional genetic infiltration, and the latter does not justify reducing the hybridizing forms to a conspecific or congeneric rank. Whether reticulation could explain apparent parallels in hominin dentition and brain size is uncertain, pending genetic investigation of these apparently complex traits. Widespread papionin taxa (such as Papio baboons and species-groups of the genus Macaca), like many such organisms, are distributed as a "patchwork" of nonoverlapping but often parapatric forms (allotaxa). Morphologically diagnosable, yet not reproductively isolated, most allotaxa would be designated species by the phylogenetic species concept, but subspecies by the biological species concept, and use of the term "allotaxa" avoids this inconsistency. A line of contact between allotaxa typically coincides with an ecotone, with neighboring allotaxa occupying similar econiches in slightly different habitats, and often exhibiting subtle, adaptive, morphological differences as well as their defining differences of pelage. "Hybrid zones," with a wide variety of internal genetic structures and dynamics, typically separate parapatric allotaxa. Current models attribute the formation and maintenance of allotaxa to rapid pulses of population expansion and contraction to and from refugia, driven by late Neogene climatic fluctuations.

An overall similarity in depth of genetic diversity suggests that papionin taxa such as Papio baboons, rather than extant humans, may present the better analogy for human population structure of the "prereplacement" era. Neandertals and Afro-Arabian "premodern" populations may have been analogous to extant baboon (and macaque) allotaxa: "phylogenetic" species, but "biological" subspecies. "Replacement," in Europe, probably involved a rapidly sweeping hybrid zone, driven by differential population pressure from the "modern" side. Since the genetic outcome of hybridization at allotaxon boundaries is so variable, the problem of whether any Neandertal genes survived the sweep, and subsequent genetic upheavals, is a purely empirical one; if any genes passed "upstream" across the moving zone, they are likely to be those conferring local adaptive advantage, and markers linked to these. In general, extant papionin analogies suggest that the dynamics and interrelationships among hominin populations now known only from fossils are likely to have been more complex than we are likely to be able to discern from the evidence available, and also more complex than can be easily expressed in conventional taxonomic terminology.

I'm not a scientist, but I can't help noticing how often the rhetoric of adherents to the multiregional theory has a thinly veiled racist subtext... particularly those who want to believe that Europeans are a distinct Neanderthal/ H.s. sapien hybrid.

Hoopskidoodle, I agree that there are some racists element by the proponents of multiregional theory.

However, humanity and its ancestor did evolved in Africa. Whatever route they want to take, it is going to end with the fact that they did ultimately evolved from african hominids.