There is a newly published paper by Andrew J. King and Guy Cowlishaw on factors that promote or constrain group synchronization among Chacma baboons (Papio ursinus) in central Namibia. The paper "All together now: behavioural synchrony in baboons" is available online as pdf for free. 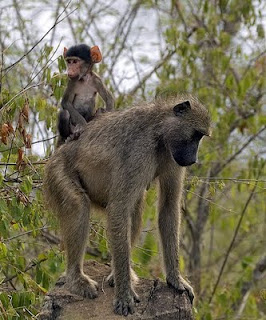 Synchronized behavior is defined as behavior performed by individuals in unison. For example, you can say that a group of animals moving through its environment is synchronized in the direction of the movement. Or a group of animals feeding is synchronized in its behavior. Synchronized behavior has its costs and benefits. Group synchronization is costly to achieve, and according to this article, due to age - sex differences, morphological - physiological differences, heterogeneous feeding terrain and visual isolation between group members. The benefit of group synchronization increases foraging benefits and reduces predation risk. A large group who travels together can easily find food or spot predators. 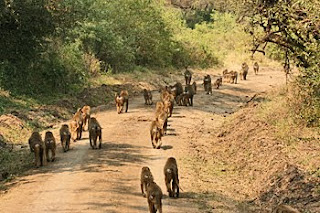 An example of synchronized behavior. A group of baboons traveling in a synchronized direction in Tanzania. Photo from Hole In The Donut Travels.

Hi! I am the woman who took the photo of the babboons traveling down the road in a row. It was an eerie experience. There were so many that our jeep had to stop in the middle of the road and let them stream by on eithr side. I was standing up in the open-top jeep, looking down. They were brazenly staring at me and chattering as they passed, and it ocurred to me how simpe it would have been for them to attack, wth such strength in numbers, had they felt they were in danger.

Hi Barbara! I'm happy that you weren't harmed. Baboons are amazing and they would never attack ... unless of course they are being taunted or you have food around you. Great pic!