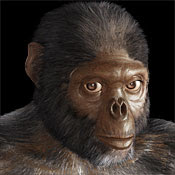 The face of Ardi. Photo from Discovery Channel.

Following publication in the journal Science on the discovery and study of a 4.4 million-year-old female partial skeleton nicknamed "Ardi," Discovery Channel will present a world premiere special, DISCOVERING ARDI, Sunday October 11 at 9 PM (ET/PT) documenting the sustained, intensive investigation leading up to this landmark publication of the Ardipithecus ramidus fossils.
UNDERSTANDING ARDI, a one-hour special produced in collaboration with CBS News will air at 11 PM (ET/PT) immediately following DISCOVERING ARDI. The special is moderated by former CBS and CNN anchor Paula Zahn and includes research team members Dr. Tim White, Dr. Yohannes Haile-Selassie, Dr. Giday WoldeGabriel, Dr. Owen Lovejoy, and science journalist Ann Gibbons
The scientific investigation began in the Ethiopian desert 17 years ago, and now opens a new chapter on human evolution, revealing the first evolutionary steps our ancestors took after we diverged from a common ancestor we once shared with living chimpanzees. "Ardi's" centerpiece skeleton, the other hominids she lived with, and the rocks, soils, plants and animals that made up her world were analyzed in laboratories around the world, and the scientists have now published their findings in the prestigious journal Science.
"Ardi" is now the oldest skeleton from our (hominid) branch of the primate family tree. These Ethiopian discoveries reveal an early grade of human evolution in Africa that predated the famous Australopithecus nicknamed "Lucy." Ardipithecus was a woodland creature with a small brain, long arms, and short legs. The pelvis and feet show a primitive form of two-legged walking on the ground, but Ardipithecus was also a capable tree climber, with long fingers and big toes that allowed their feet to grasp like an ape's. The discoveries answer old questions about how hominids became bipedal.
The international research team weighed in on the scope of the project and its findings:

"These are the results of a scientific mission to our deep African past," said project co-director and geologist, Dr. Giday WoldeGabriel of the Los Alamos National Laboratory.

Project co-director and paleontologist Professor Tim White of the Human Evolution Research Center at the University of California Berkeley adds, "Ardipithecus is not a chimp. It's not a human. It's what we used to be."
DISCOVERING ARDI begins its story with the 1974 discovery of Australopithecus afarensis in Hadar, northeastern Ethiopia. Nicknamed "Lucy," this 3.2 million year old skeleton was, at the time, the oldest hominid skeleton ever found. As the Discovery Channel special documents, Lucy's title would be overtaken twenty years later by the 1994 discovery of "Ardi" in Ethiopia's Afar region in the Middle Awash study area. It would take an elite international team of experts the next fifteen years to delicately, meticulously and methodically piece together "Ardi" and her lost world in order to reveal her significance.