Alright fine. Maybe these black and gold howler monkeys are not Whitney Houston and they don't think veganism is whack but new observation had shown that these howler monkeys actually raid chicken coop (or bird nests) for eggs. Yes, for food not to paint Easter eggs. 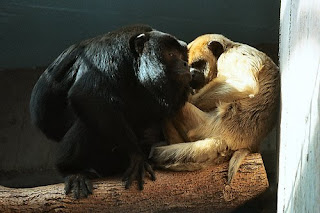 
Thought to be exclusively folivores, the black and gold howler monkeys (Alouatta caraya) feed mainly on leaves, fruits and other parts of the plants such as flowers and bark. However, the population of black and gold howler monkeys in the forest of Rio Grande do Sul, Brazil had been observed eating eggs. "Alouatta is the most studied New World primate genus in the wild and there is not a single observation of intentional ingestion of animal matter in the literature", said primatologist Dr. Julio Bicca-Marques.

Then in 2007, Ms Muhle, another of Dr Bicca-Marques's students, witnessed howler monkeys eating birds' eggs at a separate woodland site at Beco Xavier. Over an eight month period, she recorded 19 separate instances of egg predation by a group of five individuals. All these later cases involved chicken eggs, which the monkeys stole from a chicken coop. While all five monkeys were seen to enter and investigate the coop, most of the eggs were actually eaten by a single subadult male.

The evolution of egg-eating is localized in this population, leading researchers to think that it is a response to environmental conditions. There is a high density of howler monkeys living in a habitat with low food sources. Bicca-Marques et al. think that eggs act as a surrogate supplementary source of protein because of the low food diversity. The shift from folivory to omnivory reflects the flexibility of the black and gold howler monkey's diet. Watch the video of a black and gold howler monkey raiding a chicken coop.

Dr Julio Bicca-Marques and her colleagues from the Primatology Research Group published their findings in the International Journal of Primatology. The paper, "Habitat Impoverishment and Egg Predation by Alouatta caraya" is available in .pdf form through SpringerLink for free.

This finding reminds me of the dietary shift and exploitation of new food sources in chimpanzees. We know that Gombe chimpanzees (Pan troglodytes schweinfurthii) prey on red colobus monkeys (Colobus badius tephrosceles) (Stanford et al., 2005) while savanna chimpanzees (Pan troglodytes verus) from Fongoli hunt lesser bushbabies (Galago senegalensis) using spear-like tool (Pruetz and Bertolani, 2007). Will we see more published paper about dietary shift and exploitation of new food sources? I guess it would have to be a trend as these primates lose more and more of their food sources and habitat. Perhaps those with a flexible diet will better adapt to their changing environment and ecology.

Sorry PETA. It seems that omnivory is in and veganism is out.

Posted by Raymond Vagell at 7:05 AM