When Is A Monkey Really A Monkey?

A little boy pressed his nose on the glass where a Western Lowland Gorilla is interacting with the zoo-goers. He turns around to his parents with a big smile. “Oh look, the monkey wants to kiss you”, said his mother.


At the lemur exhibit, a girl asks her parents what those black and white primates were. Her dad picks her up and said, “It’s a monkey, sweetie … let’s go”.


A pair of gibbons gracefully swings around in their exhibit. Excited, a group of kindergarteners cheered as these gibbons maneuver around its habitat with great agility. “These monkeys are so active”, said the teacher.
If this sounds familiar to you then you are not alone. I spent a great deal of time near primate exhibits mainly because I love to observe their behaviors. I also enjoy watching interaction between humans and primates. However, there are times when I just can’t control myself and felt compelled to walk over to these people and explain to them that the word “monkey” is not a general term for primates (politely, of course). It shocks me that most of the time people do not read the information panel at the exhibit (aren’t zoo trips for educational purposes?). So when is a monkey really a monkey?
Monkey is a colloquial term for any cercopithecoids (Old World monkey) and platyrrhines (New World monkey). Monkeys are not hominoids (apes) or prosimians. One of the most distinctive characteristic that differentiate monkeys and apes is the presence of a tail in monkeys. Gibbons, siamangs, orangutans, gorilla, chimpanzees and bonobos are apes because they do not have a tail. 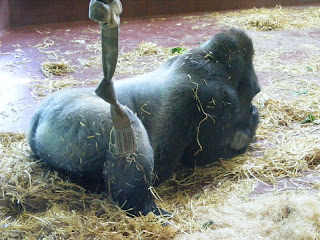 Gorillas do not have tails, so they are not monkeys but apes.
Differentiating monkeys and prosimians are a little tricky; all prosimians have grooming claws (toilet claws) but it is generally not visible within zoo exhibits. Prosimians include lemurs, lorises, galagos, aye-ayes and tarsiers. 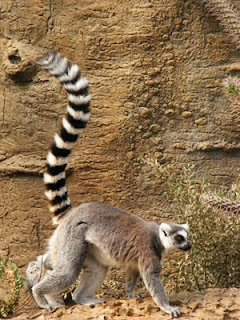 A ring-tailed lemur is a prosimian. Although it has a tail, it also have grooming claws so lemurs are not monkeys. 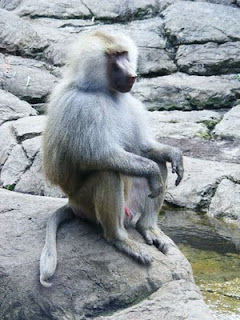 A hamadryas baboon is technically a monkey because it has a tail but has no grooming claws.

The Barbary Macaque, Macaca sylvanus, was formerly named Barbary Ape due to the absence of a tail (to be more precise, they have a vestigial tail that looks like a stump). However, we know now that it is more closely related to macaques than to apes so its name was changed to correctly reflect what they are. 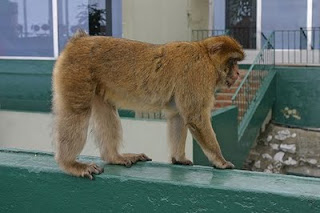 A Barbary Ape (notice the lack of tail). Flickr photo from Gerald Davison.
This brings us back to the question, “when is a monkey really a monkey’? The most straightforward answer would be “when it has a tail but doesn’t have grooming claws”. However, the most convenient answer usually lies in front of you … on the information panel. 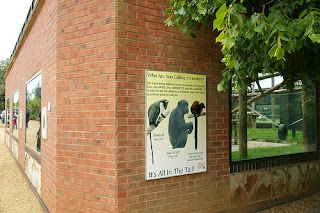 Flickr photo taken by tim ellis at the Twycross Zoo, England.
The sign reads "Who are you calling a monkey?"
Posted by Raymond Vagell at 4:23 AM

I wonder if we do the same thing with words like, "bug" or "flower," etc? I suppose we could take solace in the fact that people can identify our closest relatives in the animal kingdom with the umbrella-term "monkey." Oh well, what can you do.

I know what you mean Zacharoo but I think we should educate people, not because they are ignorant but because they truly don't know.

It's not wrong to use the umbrella term "monkey" but I think a better awareness of primates would make people understand more and want to learn more about primates.

All of this, of course, can be solved if people would read the information panel :)