The "discovery" of this new fossil primate species, thought to be more than 11 million years old, is as interesting as how it was found. Quoting from EurekAlert, a jaw bone of this newly discovered fossil primate species was found in a rubbish dump in Catalonia, Spain. Yes, you read that right ... rubbish dump! First of all, out of curiosity , who throws out a fossil. Secondly, I want to know how this fossil was "found". Although I do have a suspicion that the fossil was not thrown out but was just coincidentally dug up in a rubbish dump. Who knows ... Maybe it's just another lost in translation scenario. 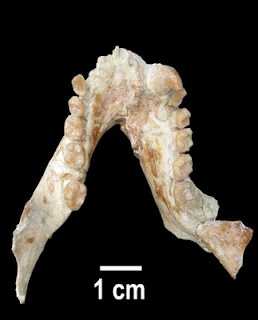 The lower jaw of Pliopithecus canmatensis. Photo from EurekAlert.
Now back to the fossil. It seems that from the molars and lower jaw, the fossil belongs to the genus Pliopithecus, an extinct family of primitive Catarrhines (Old World Monkeys). This new species was named Pliopithecus canmatensis in honor of the rubbish dump it was found (the rubbish dump of Can Mata in the Vallès-Penedès basin of Catalonia, Spain). At a glance, the dental formula on the lower jaw seems consistent with those of Catarrhines, 2:1:2:3.

"Based on the anatomical, palaeobiographical and biostratigraphic information available, the most probable evolutionary scenario for this group is that the Pliopithecoidea were the first Catarrhini to disperse from Africa to Eurasia, where they experienced an evolutionary radiation in a continent initially deserted of other anthropoids (apes)", David Alba, main author of the study and researcher at the Catalan Institute for Palaeontology at the Autonomous University of Barcelona (UAB), explains to SINC.

- EurekAlert, Discovery of a primate more than 11 million years old.

The analysis of this fossil, A new species of Pliopithecus Gervais, 1849 (Primates: Pliopithecidae) from the Middle Miocene (MN8) of Abocador de Can Mata (els Hostalets de Pierola, Catalonia, Spain), was published on American Journal of Physical Anthropology.
Posted by Raymond Vagell at 6:04 PM

Aside from saying the cynical in so much that it could be another potential Piltdown; my guess is someone with no anatomical knowledge and thought it was from a dead, domesticated or common-ish animal.

I'll be curious to see what the peer reviews have to say on this.