Land of Punt, sometimes referred to as Ta-netjer (God's land) by ancient Egyptians was a place where pharaohs organized trading expeditions to. For the ancient Egyptians, Land of Punt is the land of fragrances, giraffes and electrum, among many other exotic items.  Live baboons were among many items brought back from Land of Punt to Egypt. Researchers now think that they know where Land of Punt is, thanks to the mummified baboons found in Thebes and Valley of the Kings. 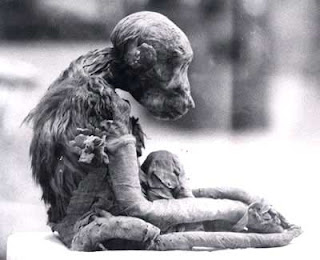 Mummified baboon, like the one above, was used by researchers to locate the Land of Punt.
Using the hair of the mummified baboons from both location, researchers ran an oxygen isotope analysis to estimate where these baboons were from (therefore revealing the location of Land of Punt). By comparing the values of oxygen isotope of the mummified baboons to present day baboon populations, all specimens from Eritrea and some from Ethiopia are deemed good matches by the researchers. Thus, Land of Punt is believed to be in Eritrea and the eastern parts of Ethiopia. Yemen, Somalia and Mozambique have been suggested as possible locations but readings of baboons from these locations do not match those of the mummified ones. (Although no baboon samples from Yemen were used, researchers are confident enough to posit that baboons from Yemen would "look an awful lot like a baboon from Somalia isotopically").

Aside from the fact that the researchers failed to obtain baboon samples from Yemen, it's crucial to point out that researchers were able to only identify the origin of the baboon in Valley of the Kings (meaning that the isotope reading from this one sole baboon was used to match up with all the present day baboon isotope reading). The mummified baboon from Thebes have spent some time living as a pet so its oxygen isotope had changed due to ingestion of local diet.

Posted by Raymond Vagell at 7:52 PM

So good topic really i like any post talking about Ancient Egypt but i want to say thing to u Ancient Egypt not that only ... you can see in Ancient Egypt Ancient Egyptian Pyramids Map and more , you shall search in Google and Wikipedia about that .... thanks a gain ,,,