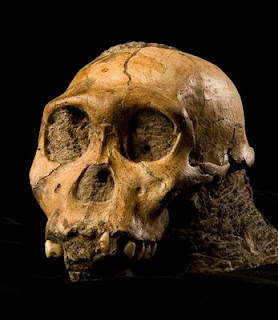 Brain scans reveals the possibility that a chunk of brain is still intact inside the brain case, along with some fossilized bugs. Google Earth was also credited for discovering these fossils. Lee Berger have been used Google Earth to map out known fossil deposits and caves. Armed with these knowledge, Berger found 500 previously unidentified fossil deposits and cave sites.

For more about A. sediba, read:
The discovery of A. sediba, along with the "Denisova hominin" and Homo floresiensis, sparked a lot of media coverage but unfortunately the lingo "missing link" seems to be almost always paired with such discoveries. One should be cautious when using the term "missing link" as most links among known fossil records are not really "missing". Our evolutionary past is not a long linear chain but more like branches coming out of a tree trunk. Remember the missing link, "Aunt Ida" (Darwinius masillae) who turned out to be just a fossil primate on the dead end of an evolutionary branch? Some of these branches indeed lead to evolutionary dead ends, so claiming that all new discoveries are "missing link" is false. For more on the etymology of the phrase "missing link", read John Hawks's "A missing etymological link" and Carl Zimmer's "Yet Another 'Missing Link'".

Posted by Raymond Vagell at 2:05 PM

interesting: I really think also the Australian Aborigines have some thing to offer in these areas as they are the world's oldest living culture

They could but would probably only shed light on Homo sapiens.