With the announcement of the newly discovered Rhinopithecus strykeri yesterday, we were only given a glimpse of this new species through an illustration and a computer modified image (Photoshopped none the less). I bet everyone was wondering why aren't there any pictures of these snub-nosed monkeys. 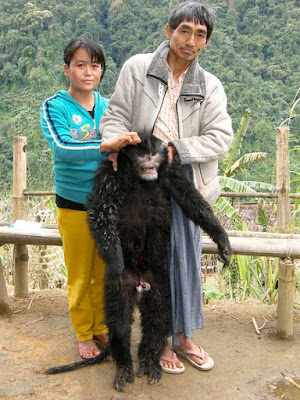 Ponder no more. Here's a photo from National Geographic showing local hunters with a dead R. strykeri that's about to be dinner (photo by Ngwe Lwin). The researchers (Geissmann et al., 2010) were not able to procure a photo of any live R. strykeri. Supposedly, they captured some wild ones but they had escaped before pictures were taken. R. strykeri are threatened by hunting and habitat destruction due to logging.

That is clearly a human in a Rhinopithecus suit. That monster's huge!

But this is sad an endangered monkey.