As if fate is testing me, I just had a Facebook conversation yesterday about new species "discoveries" and how ethnocentric they are. I mean, really ... do you really think that until these new species are "discovered" by scientists, no one (even people that lives in the area) knew of these animals? Probably not. Using the word "discovered" to formally acknowledge a species seems antediluvian. 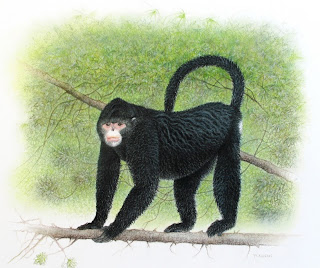 While there are currently no images of living specimens of this new species available Fauna & Flora International has commissioned an artists impression of the new species in its habitat, based on field sightings and a carcass of the newly discovered species. Image from Martin Aveling/Fauna & Flora International.
Anyway, a team of primatologists supposed discovered a new species of snub-nosed monkey in Northern Myanmar during their Hoolock Gibbon Status Review early this year. The new species was formally named  Rhinopithecus strykeri, after the President and Founder of the Arcus Foundation Jon Stryker. The locals do have a name for these snub-nosed monkeys. They call them "mey nwoah" or "monkey with an upturned face".

This primate reported has an upturned nose which, according to the locals, made them sneeze when it rains. Locals observed that to avoid getting rain water into their nose, R. strykeri would sit with their heads tucked in between their legs. Their pelage is entirely black except for a white tuft on their ears, chin beard and the perineal end. It has a relatively long tail, about 140% of its body. R. strykeri is the first species of the Rhinopithecus genus to be found in Myanmar. The other four species (R. roxellana, R. bieti, R. brelichi and R. avunculus) are found in China and Vietnam. R. strykeri's range is limited only to the Maw River area. There are estimated about 260 to 330 individuals of R. strykeri left in the wild, making them Critically Endangered according to IUCN.