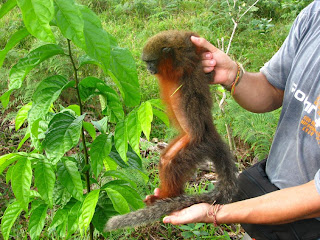 Along with the news of the discovery is the published paper by Defler et al. (2010), Callicebus caquetensis: A New and Critically Endangered Titi Monkey from Southern Caquetá, Colombia (free pdf). In it, they described the morphology and distribution of the Caquetá titi monkey. 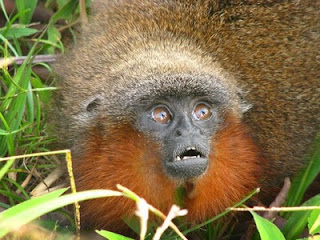 When asked about the discovery, the spokesperson for the Caquetá titi monkey (above) said, "Oh noes, you found us! We can haz cookies now?". OK fine, maybe I made that up.

For more about the discovery, read Pictures: Bushy-Bearded Titi Monkey Discovered on National Geographic.
Posted by Raymond Vagell at 5:02 AM

Raymond, do the females have beards or only the males?

The specimen (picture above) is a female. I think the beard occurs in both males and females.