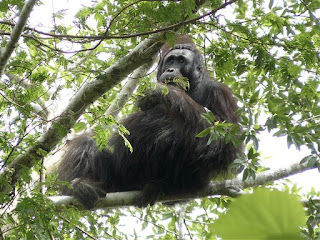 A population of the rare orangutan subspecies Pongo pygmaeus morio or the Black Bornean Orangutan named because of its black fur was found by scientists in a remote, mountainous area of Borneo. The population is estimated between 1000 to 2000 individuals though there is no confirmation of an exact number, said Erik Meijaard, senior ecologist at the The Nature Conservancy. There are currently two species of orangutans; Pongo pygmaeus sp. (Bornean orangutan) and Pongo abelii (Sumatran orangutan). Bornean orangutans are endangered and Sumatran orangutans are critically endangered according to the IUCN Red List of mammals.

This is indeed good news as Bornean orangutans are considered endangered and any newly discovered population is good news to conservation. I wonder what will they find in Borneo next. Read the rest of the article from Associated Press.
Posted by Raymond Vagell at 7:18 PM

Email ThisBlogThis!Share to TwitterShare to FacebookShare to Pinterest
Labels: orangutan