Hobbits In The Haystack: Homo floresiensis And Human Evolution 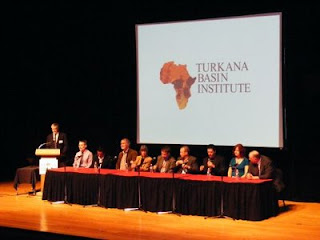 The symposium ended with questions and issues for discussion by Richard Leakey. Then, the floor was opened for general Q&A session with the panel. I will write about each presentations tomorrow, I'm currently swamped with school work!

"Accepting it (Homo floresiensis) will require us to rewrite the textbooks." - William Jungers, Stony Brook University.

Here is a list of topic presented by speakers during the symposium:

"Digging up Hobbits: The Excavations at Liang Bua" by Thomas Sutikna, National Research and Development Centre for Archaeology, Indonesia.

"Her Teeth Were Sharp, Her Gums Were Raw, and Spit Was Dripping From Her Jaw: The Little Things That Make Us Human" by Peter Brown, University of New England, Australia.

"Why the Tiny Wrist Bones of a Hobbit Tell Us So Much About a Big Chapter in Human Evolutionary Theory" by Matthew Tocheri, Smithsonian Institution.

"The Hobbit Shrugged: The Shoulder of Homo floresiensis and its Implications For Human Evolution." by Susan Larson, Stony Brook University.

A list of what Richard Leakey commented and asked during the symposium:

We should be careful when using Lucy as model for comparison because Lucy is not representative of the genus Australopithecine in general.

We don't have Homo erectus feet in our fossil record. The fossilized foot prints that were found in Ileret, Kenya has been suggested that it was left behind by Homo ergaster, an earlier version of Homo erectus.

There should be more discussion on the types of dating methods used on Homo floresiensis and the artifacts found in association with it.

There should be more discussion and research to link lithic materials to the Hobbits, or Homo floresiensis.

What were the geographic isolation of Flore? How did the Hobbits ended up in Flores?

Were there large carnivores in Flores or lack thereof? Hobbits have ape-like feet that were built for walking but not for running. Did they survive despite that because they have no need for speed to get away from predators?
Posted by Raymond Vagell at 6:09 PM