Another addition to the Fork-marked lemur species? 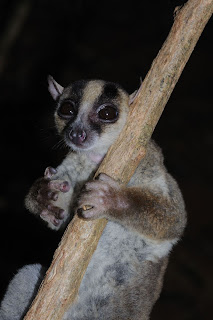 Just in time to celebrate Monkey Day tomorrow, a new species of lemur is on the verge of being formally acknowledge in science. Primatologist Dr. Russ Mittermeien first spotted this species back in 1995 during one of his expedition to Daraina, Madagascar but said that he did not have any time to follow up with his discovery until now.

This "new" species belongs to the genus Phaner or the fork-marked lemur (the species is yet to be named since they are not formally acknowledge by science). This species, like all fork-marked lemurs, feeds on exudates and flower nectar. They are nocturnal and are arboreal quadrupeds. Photo from Physorg.com by Russ Mittermeien.

There are currently four species of fork-marked lemurs, making this new species the fifth if scientifically acknowledge. Fork-marked lemurs are endemic to Madagascar, like all lemur species. They get their name from the dark stripe that runs from their back and forks on their head to their eyes. Their face and stripe actually reminds me of slow lorises.

On a personal note, I am truly digging the language used by the media. Instead of saying "new species discovered", they actually wrote "new species to science". I prefer the latter description as it is non-ethnocentric since most "newly-discovered" species are already known to the natives in the area.

For more about this news, read New lemur found in Madagascar on BBC and New lemur: big feet, long tongue and the size of squirrel on Physorg.com
Posted by Raymond Vagell at 11:51 PM

It is not yet clear whether this "new" group is a subpopulation or subspecies (race) of Phaner or, in fact, a new species. Conservation International is known for being in the "splitter" rather than the "lumper" category, having made claim to a rather large number of "new [primate] species" over the years. Another concern, in my opinion, is that primatologists claiming new sightings and/or new species appear to have stopped collecting specimens from the wild to permit close inspection (morphometric and other) with museum specimens of related taxa. I consider this radical modification of conventional mammalian field biological techniques unfortunate, leaving open to question claims of new finds.

I do agree with what you are saying about the trend of describing new species when in fact most of them are probably just subspecies, although these "claims" are not only limited to the field of Primatology.