"Home for Oliver" is an inspiring project by Andy Cockrum. Here in his own words:

I want to create a web series about the life of Oliver the chimpanzee and efforts to build him a new living area at a Texas sanctuary. My hope is that the series will document, promote and inspire the building of new habitats for Oliver and other captive chimpanzees and monkeys who are cast-offs from the pet trade, entertainment and biomedical research industries ... Today, Oliver lives at the sanctuary with another chimpanzee named Raisin. While the sanctuary is continuing to create larger grass-bottomed habitats for all of its chimpanzees, in a tough economy, they have not been able to raise funding to build a new, larger, grass habitat for Oliver, who also has special needs due to blindness and advanced age.

I am looking to raise a total of $4600.00, which should allow me to produce two to three webcasts per month for six months. Those webcasts will feature animal stories, expert interviews and the sanctuary's efforts toward building Oliver a new living area. Additionally, I may travel to other U.S. sanctuaries to conduct documentary research into the best type and size of habitat to build, and ways to utilize green building techniques.

My hope is to create this web series as the first step towards the goal of giving Oliver a new and more natural living area. The money I am seeking will go toward producing these webcasts and will not directly support the construction of Oliver’s new home, which could cost between $30,000 and $170,000. Those who would like to directly support the renovations at the sanctuary can do so through their web site, www.primarilyprimates.org.

About my involvement with the sanctuary:

I have volunteered my production and post-production services to the Primarily Primates animal sanctuary for several years now, having filmed, produced and edited over 50 videos for the sanctuary. These can be found in the “videos” section of the sanctuary’s web site at www.primarilyprimates.org.

So, if you can, please help the chap out by backing his project. Click on the banner above for more information (it will redirect you to the project's website where you can donate and watch web series). 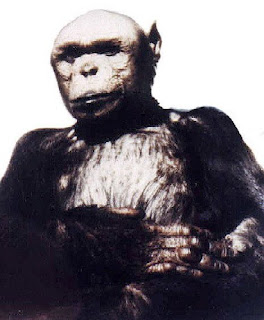 Oliver in his earlier days.

Born around 1958 in the Republic of Congo (then Zaire), Oliver was "acquired" at about 2 years old by trainer Frank and Janet Berger. Perhaps the most peculiar behavior exhibited by Oliver was habitually walking upright (instead of walking on his knuckle like most chimpanzees do). However, due to old age and arthritis, Oliver no longer walks upright (he is 52 this year!) and had reverted to walking on his knuckles like his fellow chimps.

Email ThisBlogThis!Share to TwitterShare to FacebookShare to Pinterest
Labels: chimpanzee