The Face Of A Paleo-Eskimo

The oldest genome to have been sequenced from modern human is a man who lives about 4,000 years ago in Greenland. DNA analysis from the man's hair suggest that he has brown eyes, thick dark hair, susceptible to baldness and whose ancestors migrated to Greenland from Siberia. 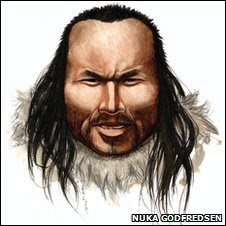 Inuk's face. Image by Nuka Godfredsen.
This man, name "Inuk" meaning "human" in Greenlandic language, belongs to the Saqqaq culture who were the first to inhabit Greenland. What's interesting is that Inuk had shovel-shaped incisors, the most common trait in Asian and Native American populations. Read more about Inuk, in Analysis of hair DNA reveals ancient human's face. The paper, published in Nature is by Rasmussen et al. (2010) is available online for free: Ancient human genome sequence of an extinct Palaeo-Eskimo.
Posted by Raymond Vagell at 4:57 PM