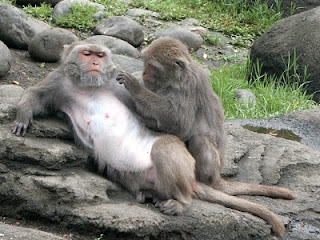 Formosan macaques. Photo from Wikipedia.
Macaques, like humans, seem to prefer conversing in short calls (or using short words) rather than lengthy vocalizations. In humans, we use the words "the", "a" and "of" often and they do not take long to say. The calls used often by macaques (greetings, grunts and coos) are also short.

The vocal repertoire of the Formosan macaques (Macaca cyclopsis) conforms to the law of brevity, indicating a commonality in the basic structure of communications in humans and non-human primates. The article by Semple et al. (2010), Efficiency of coding in macaque vocal communication is published on Biology Letters (free pdf)