After two months of being born, the female baby Sumatran orangutan from Philadelphia Zoo finally gets a name! The baby is given the name Batu, named after a group of islands of the coast of Sumatra. The other two choices were Kadoa (small gift) and Anoano (blessing). Over half of the 3.400 online votes favor the name Batu, myself included. Batu was born in October 2nd, 2009 to father Sugi and mother Tua. 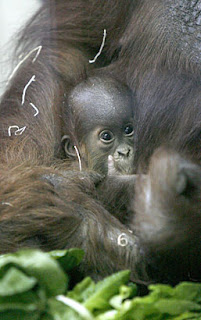 Batu, in the embrace of her mother Tua. Photo from Philadelphia Inquirer.

According to the Philadelphia Inquirer:


"PECO is sponsoring an Orangutan Baby Naming Weekend from 11 a.m. and 3 p.m. tomorrow and Sunday which will include special activities at the PECO Primate Reserve and giveaways to first 200 people to arrive at the zoo each day."


So, go on down to Philadelphia Zoo and celebrate the merriment! Unfortunately I'll be at the American Anthropological Association (AAA)'s Student Saturday today and will be going to Mutter Museum with my friends on Sunday (though I might be able to persuade them to go to the zoo instead).