The Amazing Illustrations of 'Primates of the World'


Previously available in French and recently translated to English by Robert Martin, Primates of the World by Jean-Jacques Petter & François Desbordes is a beautifully illustrated guide that is perfect for those who are interested in primates and a great reference guide to use for primate classes. Found throughout the book are 72 color plates that perfectly capture the natural movement and colors of nearly 300 species of primates by highlighting the male, female, adult and juvenile forms. Primates of the World includes concise introductory chapters that discuss the latest findings on primate origins, evolution, behavior, adaptations and classification.

In one of the chapters titled "Evolution of Madagascar's Lemurs", readers can find out what adaptive radiation is and why adaptive radiation is so important in understanding the evolution of Madagascar's lemurs. In the same chapter, readers are introduced to the Gray Mouse Lemur (Microcebus murinus) and why this species is important in understanding how the process of adaptive radiation happened in Madagascar. There is also a chapter on primate communication and sociality, complete with lifelike illustrations of howling primates that seem as if they are ready to bellow out a cacophony of songs.

The majority of the book is all about the color plates and primate descriptions. The primates are sorted by geography: Madagascar, South America, Asia and Africa. Classification, brief summary and habitat range of each genus is presented on the left while the color plates are presented on the right (except for a few genus with a large number of species) in facing page format. For a preview of this book, click here. 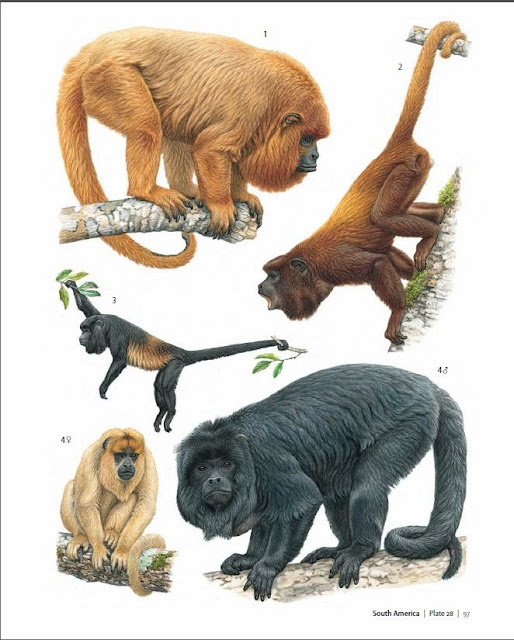 In summary, these water color illustrations are amazing and very fun to look at. Since this is not a new reference book (original French edition published in 2010), some of the newly discovered primate species are not included. Descriptions for primates are succinct yet not too wordy. For $29.95, this is a great book to have as a reference or as a coffee table book.

Jean-Jacques Petter (1927-2002) was a world authority on lemurs and one of France's leading primatologists. He was a research fellow at the Centre National de la Recherche Scientifique in Paris. François Desbordes is one of France's premier wildlife illustrators. Robert Martin is the A. Watson Armour III Curator of Biological Anthropology at the Field Museum in Chicago.

If you are interested, you can get this book in your local bookstore or online through Princeton University Press.