AMNH Dinosaur Tweetup: It Was Dino-mite!

So there I was last night, at American Museum of Natural History (AMNH) for my first tweetup event. Hosted by AMNH, it was a dinosaur tweetup to preview their upcoming exhibit, The World's Largest Dinosaurs (read the press release here). Apologies for bad photo quality. I forgot my camera and had to use my phone camera instead, which incidentally is running out of battery life as well!

The event started with us signing in at the Theodore Roosevelt Rotunda and were greeted by two of the museum's famous dinosaur articulation: the Barosaurus and the Allosaurus. After getting our name tags, we were whisked up to the 4th floor on the Hall of Saurischian Dinosaurs where the reception is held. Cheese and wine, oh my ... très sophistiquée! To those are familiar with the museum, this is where the Tyrannosaurus rex articulations are located. Of course, these articulations include both modern and outdated interpretation of the T. rex.

Oh, right. The behind-the-scene tours. We had to choose two out of three that were offered, although I really wish they would just let us do all three. I went on the tour to meet paleontologist Mark Norell and to the Big Bone room while opted out to visit the Exhibition Design Studio. I would later found out that the Exhibition Design Studio is way cooler than I thought and regretted not being able to be there personally.

On the table (picture to the left) are Silly Bandz with colors that correspond to the behind-the-scene tour you chose. The blue screen is one of the two screens that streams live twitter feed with (hashtag) #AMNHTweetup. Someone actually stopped me and told me that he enjoyed the last tweet I sent out (@PrancingPapio I have yet to verify if dinosaurs are Jesus ponies, as per suggestion of Sarah Palin #amnhtweetup). 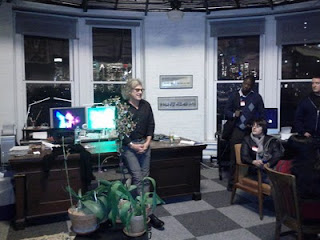 My first behind-the-scene tour was to meet Mark Norell. His office was actually a turret and the view is to die for. Mark does most of his research in China and Mongolia. Some interesting facts from Mark:

The second behind-the-scene tour was to the Big Bone room with Carl Mehling. Carl was a really fun guy and I think the ladies were swooning over him (OK, guilty) and we didn't know his wife was actually in the group with us! 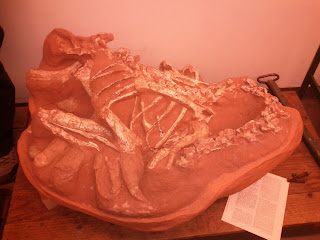 This is a very interesting fossil. The individual is in a brooding position (like modern birds) with eggs all around it. The paired capsule-like objects on the bottom left of the fossil are its eggs. Some dinosaurs have paired oviducts which explains why their eggs are always paired. However, what makes this fossil interesting is that its bones does not show signs of calcium depletion, a sign that the individual had just laid eggs. This individual might either be a male or another female from the same group, indication of allomothering.

After the tours, we had about an hour to mingle before the event ended. We were given a swag bag and everyone had their very own Pastasaurus, the spaghetti strainer dinosaur, to bring home. So glad to finally meet Krystal (@Antinpractice) and Brian (@Laelaps) in person. Also, a big HELLO to all the new friends I made at the Tweetup.

Thank you AMNH for the experience. I had a wonderful time. Actually to say that I had a wonderful time is an understatement. You can follow AMNH on Twitter at @AMNH for more information about the museum and events. There will be another AMNH Tweetup next month so stay tuned.
Posted by Raymond Vagell at 7:41 PM

A senior security architect focuses on monitoring and ensuring compliance to the many standards and procedures that affect businesses regarding their security measures.