Keeping up with the Hominin

In less than a week, some of you will be shuffling back to school as Fall session begins. Every new semester, without a doubt, you'll be able to pick out the smart ass in the class. You know, the ones that sit in front of the class and always have their hands up when the professor asks a question (think Hermione Granger). But what if you are the smart ass? Have no fear, you're reading the right post.

"Hominin - the group consisting of modern humans, extinct human species and all our immediate ancestors (including members of the genera Homo, Australopithecus, Paranthropus and Ardipithecus)."


A lot had happened this year with hominin research and some would redefine conventional understandings of this group. Below is a list of new studies that came out this year that I find quite interesting on hominin. Read up so you can show off in class with your knowledge of current hominin research. You know, just so you can make sure that your adjunct is really paying attention of what he/she is doing instead of begrudgingly teaching a class because he/she has to. Or maybe you have a geeky classmate you want to impress. Or if you're like me, you just wanna be the smartest in class because Asian Fail is not an option. So, enjoy ... and if they question you, tell them I said so. 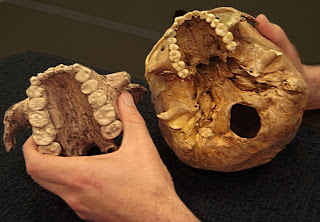 From left to right: Comparison of upper jaw, P. boisei and H. sapiens. Photo from PhysOrg. 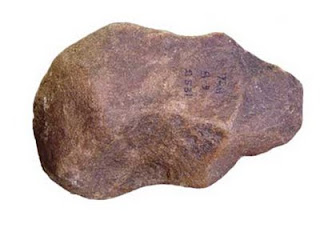 An Acheulean hand ax found in India (South Asia) indicates that H. erectus moved to South Asia shortly after the invention of stone tools, around 1.6 million years ago. Photo from ScienceNews.